Prime Minister Narendra Modi on Monday (January 27) hailed the signing of a tripartite agreement with all factions of banned insurgent organisation National Democratic Front of Bodoland (NDFB), including All Bodo Students Union (ABSU) at the Ministry of Home Affairs (MHA) in Delhi. 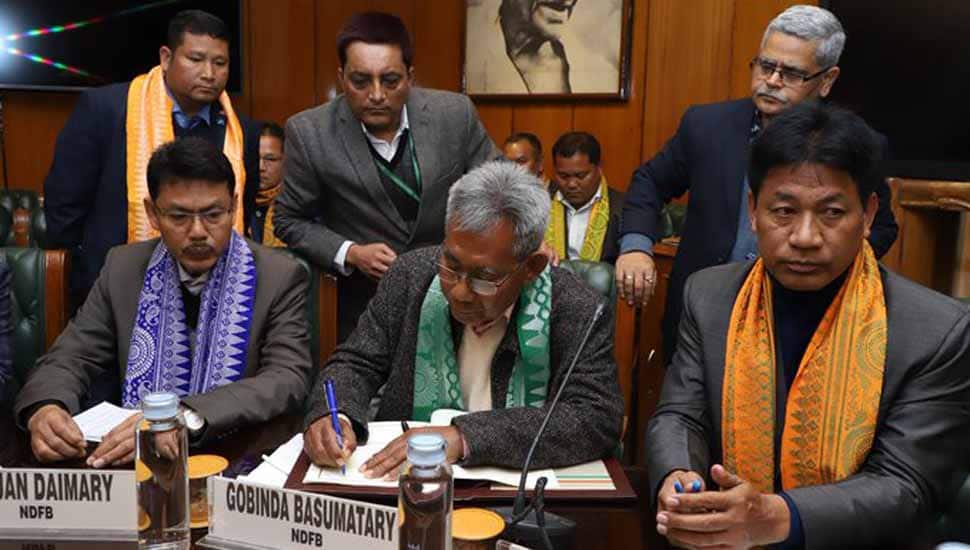 Prime Minister Narendra Modi on Monday (January 27) hailed the signing of a tripartite agreement with all factions of banned insurgent organisation National Democratic Front of Bodoland (NDFB), including All Bodo Students Union (ABSU) at the Ministry of Home Affairs (MHA) in Delhi and said that the peace accord will usher in a new dawn of peace, harmony and togetherness.

Ushering in a new dawn of peace, harmony and togetherness!

Today is a very special day for India.

The Accord with Bodo groups, which has been inked today will lead to transformative results for the Bodo people. pic.twitter.com/Y0QYlWvYqU

The tripartite agreement was signed by Assam Chief Minister Sarbananda Sonowal, the top leadership of the four factions of the NDFB, ABSU, Joint Secretary in the Home Ministry Satyendra Garg and Assam Chief Secretary Kumar Sanjay Krishna in presence of Union Home Minister Amit Shah at 1.30 pm on Monday.

The prime minister expressed confidence that the accord will bring "transformative results for the Bodo people" as it brings together "leading stakeholders under one framework".

In a series of tweets, PM Modi remarked that the accord will help in protecting and popularising the unique culture of the Bodo people. "They will get access to a wide range of development-oriented initiatives. We are committed to doing everything possible to help the Bodo people realise their aspirations," he said.

Bodo Accord inked today stands out for many reasons.

It successfully brings together the leading stakeholders under one framework.

Those who were previously associated with armed resistance groups will now be entering the mainstream and contributing to our nation’s progress. pic.twitter.com/h7hCRI1o5H

For his part, Union Home Minister Amit Shah termed the agreement as "historic" and expressed hope that it will bring a permanent solution to the decades-old problems of the Bodo people.

"Today Centre, Assam Govt and Bodo representatives have signed an important agreement. This agreement will ensure a golden future for Assam and for the Bodo people. 1550 cadres along with 130 weapons will surrender on January 30. As the Home Minister, I want to assure all representatives that all promises will be fulfilled in a time-bound manner," Shah said after signing the accord.

"It is a historical accord," Union Home Secretary Ajay Bhalla said and asserted that the pact will bring a comprehensive solution to the Bodo issue.

Sarma said that all stakeholders of the Bodo society have signed this agreement, reaffirming the territorial integrity of Assam.

The ABSU has been spearheading a movement for a Bodoland state since 1972.