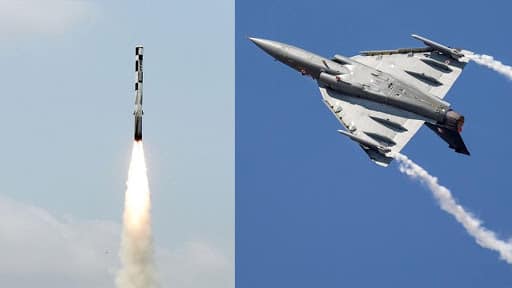 BrahMos Aerospace and Hindustan Aeronautics Limited (HAL) will take part in the MAKS 2019 (international aviation and space salon) air show in Zhukovsky, near Russian capital Moscow. The MAKS 2019 air show, which is being held from August 27-September 1, 2019 at Zhukovsky International Airport, will see the participation of several defence majors from across the world.

Russia has announced that it will unveil the export version of Sukhoi Su-57 5th Generation stealth fighter during the biennial event. The export version has been christened Su-57E and Russia expects several countries including India to show interest in the fighter. India had joined hands with Russia to develop the Su-57 but withdrew from the programme in 2018 following questions marks over the combat aircraft's stealth features, software source codes and war-waging capabilities. But Russia has offered India the chance to rejoin the programme and Indian Air Force (IAF) Chief Air Chief Marshal Birender Singh Dhanoa saying that the Su-57 will be looked at only after it joins active service with the Russian Air Force.

"The main objective of MAKS is to demonstrate achievements of Russian high tech and receptiveness of the domestic Russian market to joint projects with foreign partners. MAKS provides a comprehensive insight into the priorities and achievements of the Russian aerospace industry. Some prototypes of aircraft and combat systems, as well as experimental units that for one reason or another cannot be shown abroad, are demonstrated exclusively at MAKS," the organiser Aviasalon JSC states on its website.

The famed and deadly BrahMos supersonic cruise missile is from the BrahMos Aerospace stable while HAL is involved in manufacturing and assembling several top fighters of the Indian Air Force along with developing other defence-related products and weapons. The indigenous Ligh Combat Aircraft Tejas, Sukhoi Su-30MKI, Hawk Advanced Jet Trainer, Intermediate Jet Trainer HJT-36, Dornier 228 and HTT-40 Basic Flying Trainer are some of the aircarft developed and manufactured by HAL.

BrahMos Aerospace is a joint venture between India's Defence Research and Development Organisation (DRDO) and Joint Stock Company "Military Industrial Consortium" "NPO Mashinostroyenia" of Russia established on February 12, 1998. Taking its name from the Brahmaputra river of India and Moskva of Russia, the company has to its credit world's most accurate and only supersonic cruise missile with deep dive capability and software which can select a particular land target from a group of targets.

The 290-kilometre range BrahMos missile can be fired from land, air, ship and submarine, making it an extremely versatile weapon. The company is also working on increasing the range of BrahMos is 500 km and turn it into a hypersonic missile, capable of defeating all the known air defence systems.

In yet another jolt to Congress, Maharashtra MLA Nirmala Gavit joins Shiv Sena