The maximum numbers of seats which went to bypolls are in Uttar Pradesh were  Pratapgarh, Zaidpur (SC), Balha (SC), Rampur, Iglas (SC), Lucknow Cantonment, Manikpur, Jalalpur, Ghosi, Gangoh, and Govind Nagar. The Assembly bypolls were necessitated after some MLAs won the Lok Sabha elections and resigned as members of the state assembly. 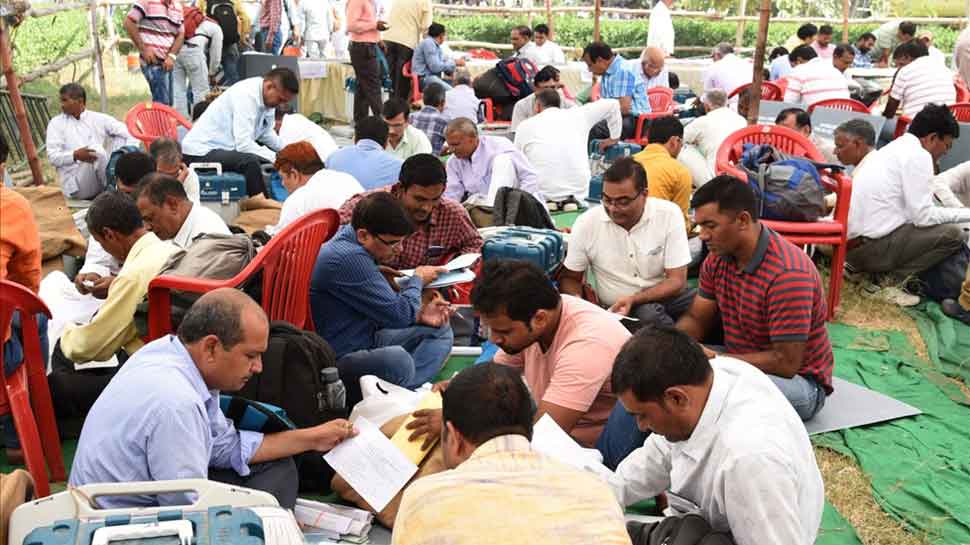 New Delhi: The stage is set for counting of votes for Assembly elections in Haryana and Maharashtra on Thursday. While the Bharatiya Janata Party (BJP) is eyeing second terms in both the states, stakes are high for Congress, which could not do well in the Lok Sabha elections 2019. Along with Haryana and Maharashtra, results will also be declared for Assembly bypolls on 51 assembly seats and two Lok Sabha constituencies spread across 18 states.

Counting of votes will begin at 8 am on Thursday. The bypoll for these seats were held on October 21.

The maximum numbers of seats which went to bypolls are in Uttar Pradesh were  Pratapgarh, Zaidpur (SC), Balha (SC), Rampur, Iglas (SC), Lucknow Cantonment, Manikpur, Jalalpur, Ghosi, Gangoh, and Govind Nagar. The Assembly bypolls were necessitated after some MLAs won the Lok Sabha elections and resigned as members of the state assembly.

The elections are significant as it is the first Assembly polls after BJP's resounding victory in the Lok Sabha election 2019 for a successive second term in office.

The counting will also be held for four Assembly seats in Assam and two each in Himachal Pradesh and Tamil Nadu. All these states are currently ruled by BJP and its allies.

The other states which witnessed by-election on Monday were Punjab (4 seats), Kerala (5 seats), Sikkim (3 seats), Rajasthan (2 seats) and one seat each in Arunachal Pradesh, Madhya Pradesh, Odisha, Chhattisgarh, Puducherry, Meghalaya and Telangana.

Counting of votes for bypoll in Satara (Maharashtra) and Samastipur (Bihar) Lok Sabha seats will also be held on Thursday (October 24). NCP won from Satara in 2019 Lok Sabha poll, while the Ram Vilas Paswan-led LJP claimed victory in Samastipur.

In Uttar Pradesh, the by-election witnessed a four-cornered contest with the BJP, Bahujan Samaj Party (BSP), Samajwadi Party (SP) and Congress fielding candidates on all 11 seats. Notably, eight of these seats were won by the BJP in 2017 Assembly election and one seat was claimed by BJP's ally Apna Dal (Sonelal).

In Rajasthan, the Congress is hoping to win both the seats as it will help the ruling party to consolidate its thin majority. Notably, both these seats were won by BJP and its ally RLP in 2018 Assembly poll.

In Gujarat's Radhanpur, former Congress MLA Alpesh Thakor is contesting on BJP's ticket. Out of the six seats where bypoll were held on Monday, four were with the BJP and two with the Congress.

In Punjab, a victory for Congress will add to the charisma of Chief Minister Amarinder Singh's policies. Out of the four seats in Punjab, Congress, BJP, Shiromani Akali Dal and Aam Aadmi Party held one seat each.

Counting will also take place for Khonsa West seat in Arunachal Pradesh, Chitrakot in Chhattisgarh, Huzurnagar in Telangana, Jhabua in Madhya Pradesh and Shella in Meghalaya. In Bihar, Chief Minister Nitish Kumar-led JD(U) had won four seats while one seat was held by Congress.

Counting of votes in Haryana Assembly election to begin soon