The 35-year old bull (male) elephant was captured, after tranquillizing, from Rongjuli forest division in Western Assam`s Goalpara district on November 11. While two darts were used on November 11 to tranquilise and capture it, another dart was used the next day to translocate the elephant. Forest department shifted the rogue to Orang national park on November 12. 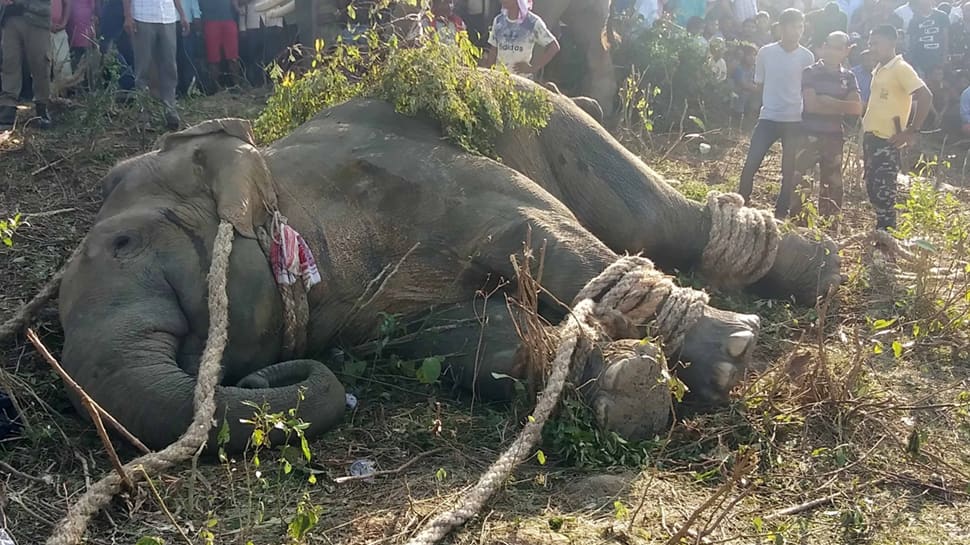 Guwahati: A wild rogue elephant which was tranquillized recently by the forest department has died in captivity, officials said. "The animal was doing fine but the keepers here have reported that it died around 5.30 a.m. today (Sunday)," said a senior official of the Orang national park. While the locals had nicknamed the rogue as Laden after the late Al Qaeda chief Osama Bin Laden, it was named as "Krishna" after he was captured.

The 35-year old bull (male) elephant was captured, after tranquillizing, from Rongjuli forest division in Western Assam`s Goalpara district on November 11. While two darts were used on November 11 to tranquilise and capture it, another dart was used the next day to translocate the elephant. Forest department shifted the rogue to Orang national park on November 12.

The Assam government had already sent a team of expert veterinarians, including KK Sarma to carry out a postmortem on the dead elephant to ascertain the cause of its death.

A team led by BJP legislator from Sootea constituency, Padma Hazarika, tranquillized the rogue elephant. There were forest officials and veterinarians in the team who assisted in tranquillizing the elephant.

Although the forest department earlier planned to release the elephant in the wild, it later decided to keep it in captivity owing to strong public protest against releasing the rogue in the wild. People were apprehensive that the elephant might again attack nearby human habitations.

While normally elephants between six to seven years old are referred for taking into captivity, Laden aka Krishna was 35 years old and the decision to keep it in custody had concerned wildlife activist. The death of the elephant has drawn the Assam Forest Department into controversy as different wildlife activists of the state have questioned if it followed the standard operating procedures while capturing it.

"It was a healthy wild elephant and the government took credit for the operation to tranquilise the elephant. Now that the elephant is dead in captivity, the government must make it clear as how the elephant died?" wildlife activist and member of the steering committee of Central government on Project Elephant, Soumyadeep Datta told IANS on Sunday.

"The people of the state must know how many doses of medicines were used in the darts that were shot to tranquilise the elephant. The government which took credit for capturing it on November 11... how can the same government be silent on its death," he asked.

The prominent wildlife activist also asked the government to make clear the cost of the whole operation to tranquilise the rogue.

Similarly, another wildlife activist Rohit Choudhury questioned as to who had authorized BJP legislator from Sootea constituency, Padma Hazarika, to fire the dart to tranquilise the elephant. "The Forest Minister must make it clear if he had given permission to Padma Hazarika to dart the elephant and under what section of law? Anyone can claim that of having expertise in tackling a rogue elephant. Does that mean the government will allow him to dart the elephant," he asked.

The elephant had reportedly killed five people on October 29.