China created border dispute with India as if it was part of 'mission': Defence Minister Rajnath Singh

The Defence Minister made this statement as Indian and Chinese troops remain locked in a standoff in eastern Ladakh for over five months. 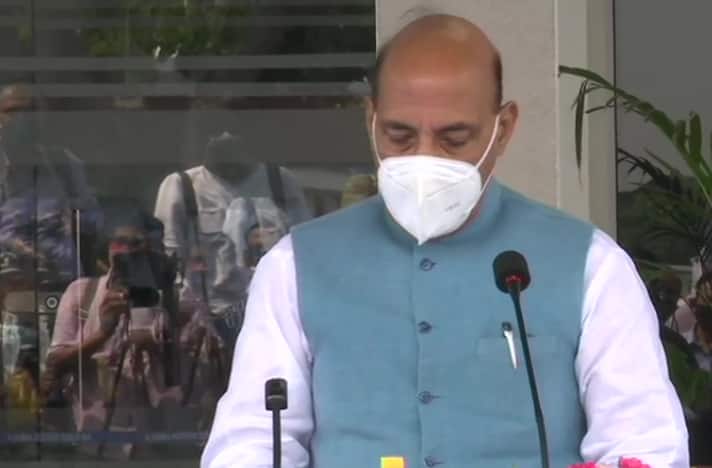 New Delhi: Defence Minister Rajnath Singh said on Monday (October 12) that China is creating a dispute at the border with India as if it was part of a "mission", while speaking at an online event after inaugurating 44 bridges. Rajnath Singh said India is not only facing the situations along the frontiers resolutely, but it is also bringing in major development including in border areas.

The Defence Minister said, "You are well aware of the conditions created along our northern and eastern borders. First, it was Pakistan, and now also by China, as if a border dispute is being created under a mission. We have a border of about 7,000 km with these countries where the tension continues."

The Defence Minister made this statement as Indian and Chinese troops remain locked in a standoff in eastern Ladakh for over five months. Both India and China held a series of diplomatic and military talks to resolve the border standoff. However, no breakthrough has been achieved to defuse the situation.

Singh said in the challenging times of COVID-19 and despite the border tensions and disputes caused by Pakistan and China, the country was not only resolutely facing them but also bringing about historical changes in all sectors of development.

Rajnath Singh was speaking after inaugurating the bridges built in strategically key areas of Ladakh, Arunachal Pradesh, Sikkim, Himachal Pradesh, Uttarakhand, Punjab and Jammu and Kashmir. Majority of these bridges are expected to significantly improve movement of troops in areas along the border with China in Ladakh, Sikkim and Arunachal Pradesh sectors.

The bridges inaugurated by Singh included 10 in Jammu and Kashmir, eight in Ladakh, two in Himachal Pradesh, four each in Punjab and Sikkim and eight each in Uttarakhand and Arunachal Pradesh.

He also laid the foundation stone for Nechiphu Tunnel in Arunachal Pradesh. This 450 metre-long tunnel would ensure all-weather connectivity across Nechiphu pass.

In his address, Rajnath Singh complimented the Border Roads Organisation (BRO) for their achievements in improving infrastructure in border areas and said that dedication of 44 bridges in one go in itself was a record.

The Defence Minister said construction of the bridges will benefit both the civilian population as well as the military in the areas, adding "Our armed forces personnel are deployed in large numbers in areas where transport is not available throughout the year."

Noting improvement in border infrastructure will significantly help armed forces, he said "These roads are not only for strategic needs, but they also reflect equal participation of all stakeholders in the development of the nation."

The defence minister praised the Border Roads Organisation (BRO) for working tirelessly even during the coronavirus-triggered lockdown period.

The defence ministry said despite unprecedented snowfall breaking a 60-year record, all strategic passes and roads were cleared for traffic about one month before their average yearly opening dates.

He further said, I am happy to know that over 2,200 kilometers of roads have been cut by the BRO during the last two years, using the latest technologies, and state-of-the-art equipment. Also, surfacing was carried out on about 4200 kms of roads".

Notably, the nearly 290-km-long road will be crucial for the movement of troops and heavy weaponry into the frontier bases of the Ladakh region and will provide a crucial link to the Kargil region.