Indian security agencies have expressed concern over Chinese weapons being provided to the terror groups active in Myanmar. In a recent development, a huge cache of Chinese weapons was recovered near Myanmar-Thailand border, which was destined to Arakan Army (AA) so that Indian assets, including the Kaladan Multimodal Project, could be targeted. 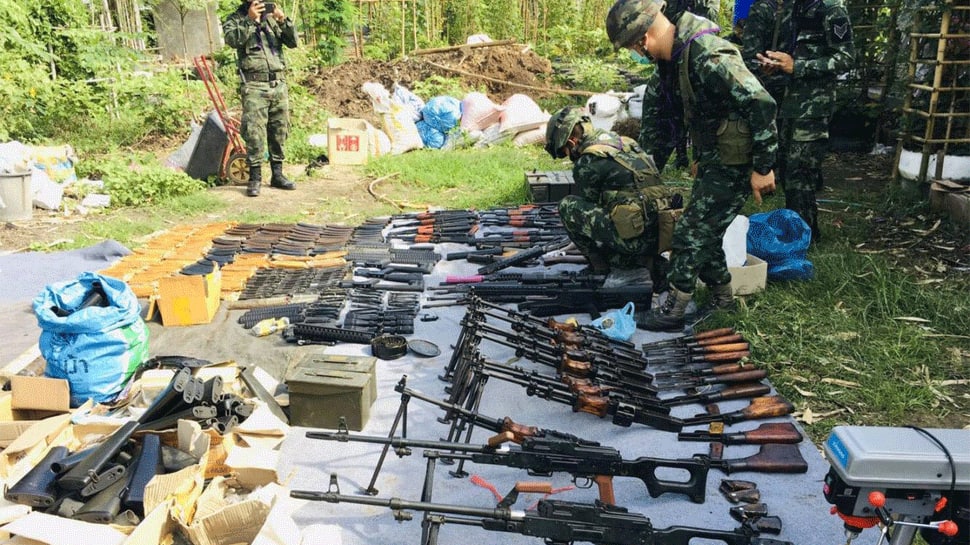 NEW DELHI: Indian security agencies have expressed concern over Chinese weapons being provided to the terror groups active in Myanmar. In a recent development, a huge cache of Chinese weapons was recovered near Myanmar-Thailand border, which was destined to Arakan Army (AA) so that Indian assets, including the Kaladan Multimodal Project, could be targeted.

Myanmar and Thailand Police conducted a joint operation last month in June and seized a large consignment of Chinese weapons. Security agencies had arrested a total of 6 people in connection with this case. Those arrested revealed that the Chinese weapons were being transported to the Arakan Army operating in Rakhine state adjoining Bangladesh.

AK 47 assault rifles, anti-tank mines, grenades and machine guns were among the seized items from a house in Mae Sot District on the Thai side.

“They are not the weapons currently used by the Arakan Army. The weapons manufactured by the Wa (United Wa State Army) and the KIA (Kachin Independence Army) are not up to mark. They can’t fire on automatic. The seized weapons are original and Chinese-made,” The Irrawaddy reported citing a source.

Last year, Indian and Myanmar Armies had carried out a joint coordinated operation in their respective borders against Arakan Army and other rebel groups under the code name ‘Operation Sunrise’ to secure the Kaladan Project. The Arakan Army has set up several camps in areas across Mizoram's Lawngtlai district, posing a threat to the Kaladan Project. This project is being viewed as India's gateway to Southeast Asia.

In his interview given to Bangkok Post, the Deputy spokesman of Thailand Police Col Kissana Phattanacharoen, said, it is believed the seized weapons were intended to create havoc and the discovery comes amid intelligence reports about suspicious activities being planned by a certain group of people.

Pakistan's ISI is eyeing to recruit Rohingya jihadis for terror activities in Bangladesh and the eastern part of India. There is a strong link available between Let and terror group Aqamul Mujahideen, which is a breakaway group from the Harkat-ul-Jihad Islami Arakan (HUJI-A), headed by Abdus Qadoos Burmi, a Pakistani national of Rohingya origin has called jihad in Myanmar. Abdus Qadoos Burmi has shared stages with LeT chief Hafiz Saeed.

Last year in the month of Nov, a huge cache of Chinese weapons was seized in Shan state by the Burmese Army including surface to air missiles.

During the investigation, it was revealed that all the weapons were to be delivered to terror groups and were smuggled through China.

“There is a well-planned conspiracy to destabilized the Myanmar border adjoining to Bangladesh and India. Through the Kaladan Project, India will be able to reach its strong presence in Myanmar, which will help to counter Chinese presence. This could be a reason that Chinese weapons are transported to rebels groups like AA.” said an officer aware of these developments.

India entered into a framework agreement with Myanmar in April 2008, to facilitate the implementation of the project. On completion, the project will help connect Mizoram with the Sittwe Port in the Rakhine State of Myanmar. On the Indian side, work is on to extend the Aizawl-Saiha National Highway by 90 km to the international border at Zorinpui.

In 2004, ten truckloads of arms and ammunition smuggled from China were seized by the Bangladesh Army. In another incident in 2010 when northeast militant Anthony Shimray, who had returned from Nepal, was apprehended by Indian security agencies. During the interrogation, Shimray disclosed that he was tasked to send a large consignment of AK 47s, M16 rifles, machine guns, sniper rifles, and rocket launchers among other arms and ammunition from China to India.

As per some reports, Beijing had also been taking help from Pakistan's intelligence agency ISI against India. China and Pakistan had jointly set up an operational hub against India in Bangladesh capital city Dhaka with the aim of contacting militant groups of northeast states.