Daily Aerial surveillance by ICG Dornier aircraft has indicated no oil spill in the area. 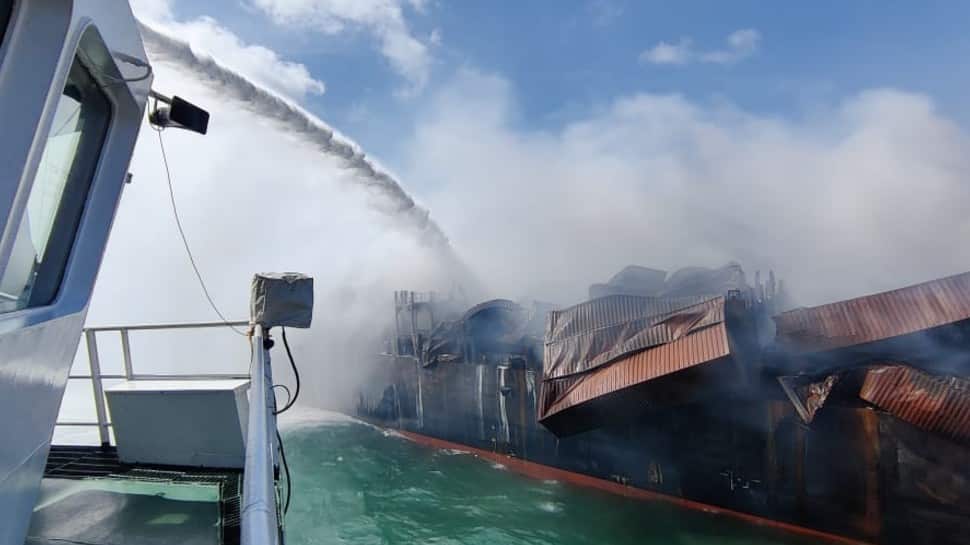 New Delhi: Efforts of Indian Coast guard (ICG) vessels and Sri Lankan tugs over the last six days (since May 25th) has restricted the fire on Container ship MV X-Press Pearl to a small portion in the ship’s rear.

In what is being regarded as a positive outcome, the smoke emanating from the vessel has turned from black to grey/white, with its intensity also getting reduced.

Daily Aerial surveillance by ICG Dornier aircraft has indicated no oil spill in the area.

Take a look at some of the visuals from the scene:

The Coast Guard adds that owing to the careful and measured execution of firefighting operations, there has been no change in the vessel’s trim (which means that the front and rear portion are floating at equal level).

Likewise there is no change in the draught/draft of the vessel (indicating that the  overall vessel has not gone lower than usual). Hence it can be said that the stability and watertight integrity of the vessel are intact.

ICG Ships and Sri Lankan tugs are undertaking continuous boundary cooling(spraying water and foam to prevent the further spread of fire).
In addition, dry chemical powder bags are being dropped over the burning vessel by Sri Lankan helicopters to contain and extinguish the metallic fire.

Besides their Fire Fighting capabilities(spraying 660 liters of water/foam per minute), ICG vessels are also equipped with adequate Pollution Response capabilities in case of oil spill, if any.

The presence of a specialised Pollution Response vessel ICGS Samudra Prahari since Saturday has provided added strength to overall operation.

This round-the-clock joint fire fighting operation into its sixth day has been named ‘Operation Sagar Aaraksha 2’, which symbolises growing maritime cooperation and collaboration between India and the Indian ocean Littoral state.

It may be recalled that a similar joint operation between India and Sri Lanka was named 'Sagar Aaraksha' in September 2020.

Back then, ICG Ships and Sri Lankan vessels were involved in a fire fighting operation onboard MT New Diamond.