An Improvised Explosive Device (IED) was also detected near one of the dummies, in a bid to target security personnel. 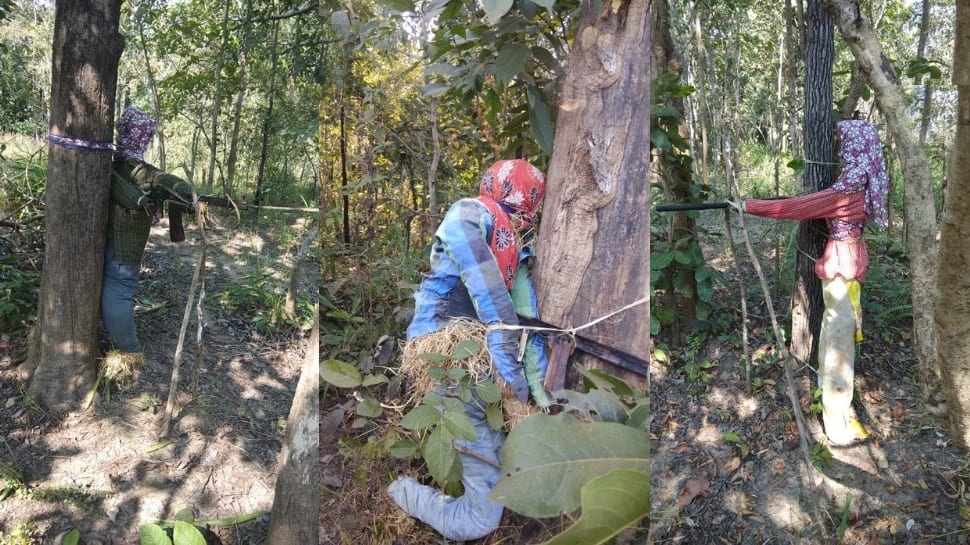 The Naxals seem to have come up with a new strategy to target security forces and confuse them while conducting operations in forests of Chhattisgarh. During a search operation by the Central Reserve Police Force (CRPF) on Thursday, security personnel recovered dummies of Naxal operatives, hidden behind trees in a manner that they appeared like real men.

An Improvised Explosive Device (IED) was also detected near one of the dummies, in a bid to target security personnel. The IED was, however, demolished without any harm to any personnel. The dummies and the explosive were found by the 150th battalion of the CRPF while the company was going towards Chintagufa area of Sukma in Chhattisgarh.

There were a total of three dummies and IED was placed near one of them. The security personnel first mistook the dummies for Naxals at first and cordoned the area. Weapon-like structures made of wood were kept along with the dummies.

#WATCH: 150th battalion of Central Reserve Police Force (CRPF) demolishes an IED (Improvised Explosive Device) that was detected near one of the three dummies of Naxals found by the company in Sukma. (29.11.18) pic.twitter.com/o0Rl4S5819

“We mistook it for Naxals at first and cordoned the area. Dummies were later removed with precautions. There was an IED with release mechanism near one dummy, it was demolished,” CRPF 150th battalion commandant D Singh told news agency ANI.

“It seems like a new strategy of Naxals to confuse forces and create panic,” he added.

Chhattisgarh: 150th battalion of Central Reserve Police Force (CRPF) yesterday recovered three dummies of Naxals carrying fake wood weapons in Sukma, when the company was going towards Chintagufa area for area domination. An IED was detected near one of the dummy & was demolished pic.twitter.com/GFYmFXTIEz

The comes just days after security forces on Monday gunned down at least eight Naxals during an encounter in Saklar village of Sukma district.

The encounter was conducted by personnel of Chhattisgarh Police's District Reserve Guards (DRG) and 206 and 208 CoBRA units of the CRPF. Two security personnel were also martyred in the gunbattle.

All the Maoists belonged to the People's Liberation Guerrilla Army of the Communist Party of India (Maoist). The joint operation was launched in the core area of Maoists stronghold and the encounter has been a major success.