Sonia Gandhi said, "Many BJP leaders made inciting comments creating an atmosphere of fear and hatred." 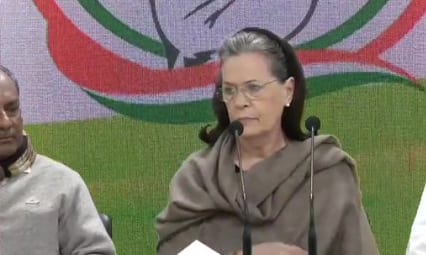 Sonia Gandhi said, "Chief Minister and Delhi government is equally responsible for not activating the administration to reach out to the people to maintain peace and harmony. It is the collective failure of both governments that have resulted in a great tragedy in the capital city."

The Congress Interim President said, "There is a conspiracy behind the violence, the country also saw this during Delhi elections. Many BJP leaders made inciting comments creating an atmosphere of fear and hatred."

"Delhi Police has remained paralysed in the last 72 hours, around 18 lives have been lost so far, including a head constable, and hundreds are in hospital, many with gunshot injuries. Violence continues unabated on the streets of North East Delhi," she said.

Sonia Gandhi said that "Many BJP leaders made inciting comments creating an atmosphere of fear and hatred."

Congress spokesperson Randeep Surjewala said, "Congress was to hold a march and give a memorandum to President today, but he communicated that he is unavailable and has given us time tomorrow. Upholding the respect for his high office, we have deferred the march for tomorrow."

"Whether the violence erupted in East Delhi (MOS-Home) or spontaneous (MHA), the government has a duty to end the violence," he tweeted. In another tweet, he said, "The violence has continued since Monday and there are still incidents of violence. This shows the massive failure of the Delhi Police."