The Congress leader said he will join Geelani, Mufti, Abdullah in protest if Article 35A is tampered. 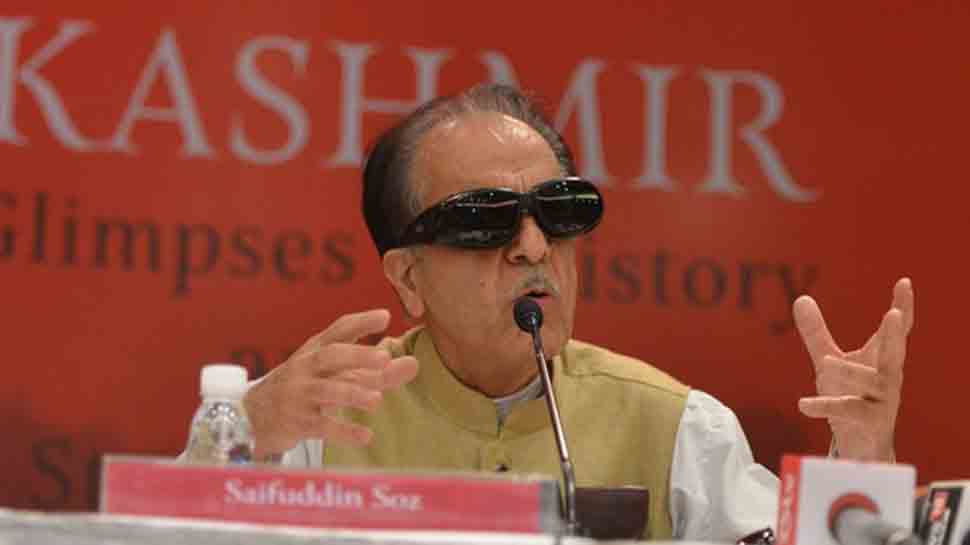 New Delhi: With the hearing on the constitutional validity of Article 35A at the Supreme Court likely this week, Senior Congress leader and former union minister Prof  Saifuddin Soz on Monday said that Kashmir's relation with the union will be severed if Article 370 is repelled.

"It is not known why this strong military force has been deployed in the valley of Kashmir. Locals of Kashmir get shocked seeing military forces around them. And if Article 370 is repelled by the court, Kashmir's relation with the union will also get severed. RSS is keen to scrap Articles 35A and 370 from Kashmir and so has approached the Supreme Court," Soz said.

"RSS has already caused a lot of damage to the country. Who is at Supreme Court presently? RSS. Who has filed the petition on Article 35? RSS. This is not going to give any benefit in 2019? There will be chaos in 2019. The government will change in 2019 (after the Lok Sabha elections). And now, the RSS has approached the court to get Article 370 scrapped from Kashmir. This will sever the relationship between the state and the union," Soz said.

Training his gun towards the Narendra Modi-led government in Centre, Soz said, "Our relationship is with secular India. Relationships cannot be established with the haters. So much has been damaged in the last four years and no further expectations lie ahead."

"Today, mainstream and Hurriyat are on the same page and issue can be resolved through dialogues. Did the government speak to anyone? Our and our children' lives are now based on what the government at Centre plans to do about Kashmir. Modiji spoke his mind through 'Mann Ki Baat' but he did not bother to listen to others. So far, what has he done for people of Kashmir? During his tenure as the Prime Minister, casualties suffered by security forces in terrorist violence has been the highest. This is a political issue and the solution should be political," he said.

The Supreme Court is said to begin hearing on Article 35A from February 26-28 and it has led to a lot of anxiety in the Valley.

Article 35A, which was incorporated in the Constitution by a 1954 Presidential Order, accords special rights and privileges to the citizens of Jammu and Kashmir and bars people from outside the state from acquiring any immovable property in the state.

It denies property rights to a woman who marries a person from outside the state. The provision, which leads to such women from the state forfeiting their right over property, also applies to their heirs.

Several petitions, including those by political parties like the National Conference and the CPI-M, were also filed in the Supreme Court in support of Article 35A that also empowers the state Assembly to define "permanent residents" for bestowing special rights and privileges to them.

The state government, while defending the article, had cited two verdicts of the constitution benches of the Supreme Court in 1961 and 1969, which had upheld the powers of the president under Article 370(1)(d) of the Constitution to pass constitutional orders.

The Supreme Court is said to begin pleas of Article 35A from February 26-28.