Dheeraj Gurjar, who is a Congress Secretary, has been issued a challan of Rs 6,300 for riding the two-wheeler without a helmet. 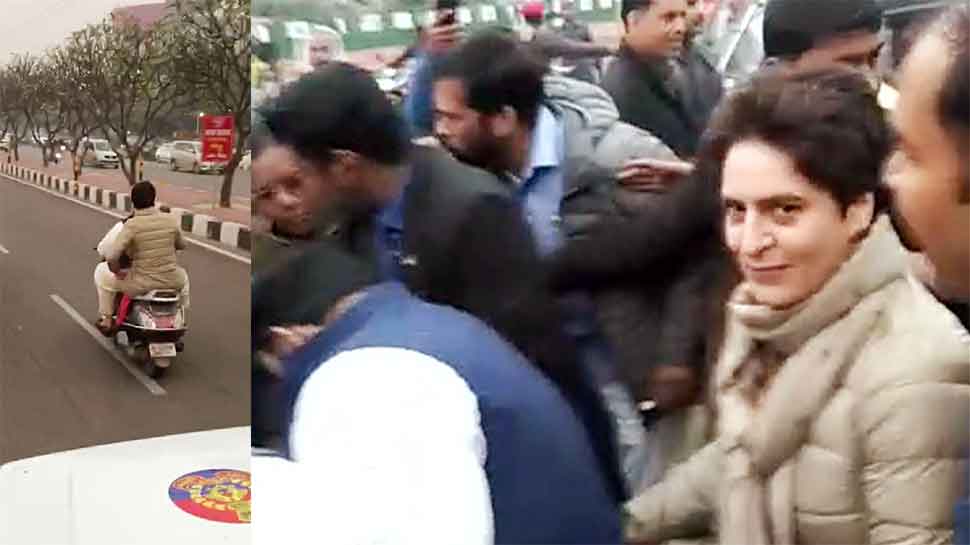 LUCKNOW: The Uttar Pradesh Police issued a challan to the Congress leader who sped away party general secretary Priyanka Gandhi Vadra to meet former IPS office SR Darapuri at his residence in Lucknow on Saturday (December 28). Dheeraj Gurjar, who is a Congress Secretary, was issued a challan of Rs 6,300 for riding the two-wheeler without a helmet.

It was a dramatic scene at the Lohia Path on Saturday when Priyanka Gandhi, accompanied with several other Congress leaders, like Jitin Prasada and Acharya Pramod Krishnam, as on her way to the house of retired IPS officers SR Darapuri. However, she was stopped by the police at Lohia Path in the Uttar Pradesh capital. Priyanka was also prevented from meeting the family of Congress leader Sadaf Jafar, who has been arrested over anti-CAA protests.

She then hitched a ride on the two-wheeler driven by the party secretary. However, both Priyanka and Gurjar were not wearing helmets and were found violating traffic norms.

Later, they were again stopped at the Polytechnic Square, form there she walked to ex-IPS officer's residence. Priyanka later alleged that she was manhandled by the police and 'grabbed by the neck for no reason'. "The police stopped me while I was going to meet Darapuri's family. The cops manhandled me. They surrounded me while I was riding pillion on a party worker's two-wheeler. After that I walked to Darapuri's residence," Priyanka alleged, according to IANS.

She later alleged that she was manhandled by the police and 'grabbed by the neck for no reason'.

Later, Priyanka Gandhi`s office lodged a complaint with the Central Reserve Police Force (CRPF) I-G Pradeep Kumar Singh over the alleged breach of protocol by the UP Police. "Circle Officer of the Hazratganj Abhay Mishra entered without prior permission the premises at 8.45 a.m, where Priyanka Gandhi Vadra, the protectee, was staying. He entered into a verbal duel with the CRPF personnel, in-charge of the protectee`s security, mere five meters away from her room," her office wrote in the complaint.

According to Congress, Priyanka Gandhi had a close shave when her carcade was blocked by the screeching police vehicles. When they could not stop her, more forces were called to prevent her from moving ahead. "There were only two women cops in the police team that tried to block her way physically," the Congress alleged.

Launching a scathing attack on the Bharatiya Janata Party (BJP), Congress spokesperson Sushmita Dev said, "The UP Police physically manhandled Priyanka Gandhi. A female police officer pushed her. When she lost balance, she was grabbed by the neck. Is it Ajay Singh Bisht (Yogi Adityanath) goondaraj in the state?"

Meanwhile, Archana Singh, the woman cop, who tried to stop Priyanka, refuted the claims of 'manhandling', and said she was only doing her duty 'rightfully'. In her report to the senior police officers, Singh said, "She had been assigned the duty of fleet in-charge of Priyanka's visit."

"The cavalcade left the party office at Gokhle Road, but Priyanka Gandhi`s car took another route from the 1090 traffic intersection towards Lohia Road. Following this, I inquired with her party leaders, but they refused to share her travel plan. Then Priyanka Gandhi herself started walking, leaving her car behind, with the party workers," the woman cop claimed.

Onions for Rs 65 a kilo in Chandigarh! 800 kilos sold in four hours