Congress veteran Digvijaya Singh had termed the dastardly Pulwama terror attack an “accident” and raised doubts over the IAF airstrikes. 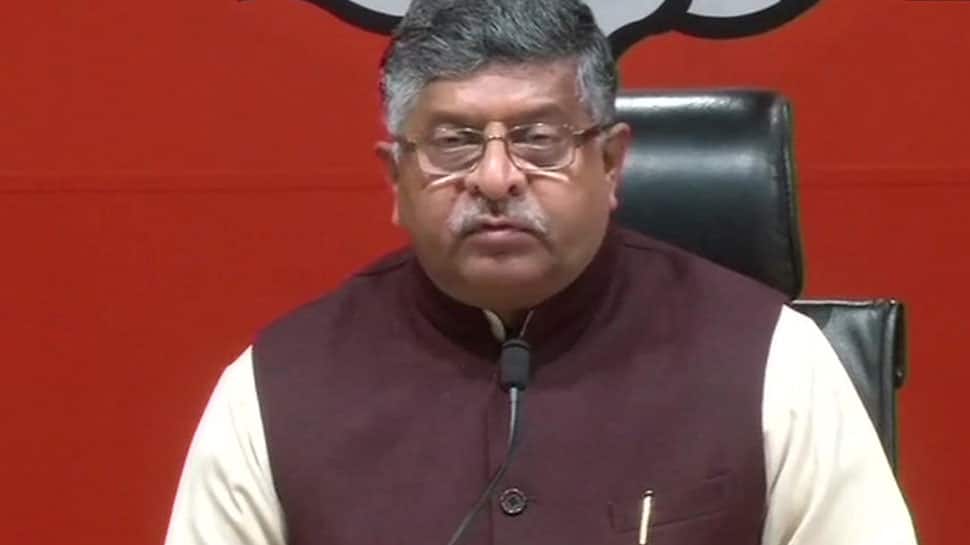 NEW DELHI: With several opposition leaders questioning the success of the recent Indian Air Force (IAF) airstrikes on terror camps in Pakistan's Balakot, the ruling BJP on Tuesday termed it as a ''conspiracy'' which was lowering the morale of the armed forces.

Addressing a press conference in the national capital, Union Minister Ravi Shankar Prasad said, ''BJP would like to know whether all this tweeting (by Congress leaders on Pulwama terror attack) a part of a conspiracy? Because whatever is being said here is being shown in Pakistan.''

Union Minister Ravi Shankar Prasad: BJP would like to know is all this tweeting (by Congress leaders on #PulwamaTerrorAttack) a part of conspiracy? Because whatever is being said here is being shown in Pakistan. pic.twitter.com/A2BGUugR2E

Criticising the main opposition party, the senior BJP leader said, ''There is a growing competition between senior leaders of the Congress party as to who is more vocal in lowering the morale of the security forces.''

Prasad also came down heavily on senior Congress leader Digvijaya Singh for calling the Pulwama terror attack on the CRPF convoy an ''accident.''

''Has Digvijaya Singh reduced himself to such a low level that he will call the most heinous terrorist attack on CRPF jawans as an accident? This is their thinking,'' Prasad asked.

Urging the BJP cadres across the nation, the Union Minister asked them to seek questions from the Congress leaders and expose them on questioning the valuor and actions of the armed forces.

It may be recalled that Congress veteran Digvijaya Singh had termed the dastardly Pulwama terror attack an “accident” and said that “doubt” expressed in some foreign media reports over the February 26 IAF air strike is putting a question mark on the credibility of the Indian government.

Singh, a former Madhya Pradesh Chief Minister, made the remarks while tweeting in Hindi.

He said after the Pulwama “durghatna” (accident) and the Indian Air Force (IAF) strike, "sandeh” (doubt) is being expressed in some foreign media reports following which “vishwasniyata” (credibility) of the government is under question.

The former AICC general secretary has in the past also made controversial statements.

In another tweet on Tuesday, Singh questioned the casualty claim in the IAF airstrike and demanded Prime Minister Narendra Modi to come clean on the same.

"Prime Minister, some ministers of your government say 300 terrorists killed, BJP president says 250 are killed, Yogi Adityanath says 400 people were killed and your minister SS Ahluwalia says that no one died. And you are silent about this issue. The country wants to know who is a liar in this," he said.

After the infamous Batala House encounter, Digvijaya had questioned the veracity of Delhi Police’s evidence and had also once used a suffix indicating respect for UN-designated terrorist Hafiz Saeed.

In August 2016,  Singh had also addressed Jammu and Kashmir as India-occupied Kashmir.

However, he later clarified that it is an integral part of India.

Singh's conroversial tweet came at a time when many opposition leaders are raising questions on the Balakot strike by the Indian Air Force and are asking for proof and the exact casualty inflicted on terrorists.

BSP chief Mayawati had on Tuesday tried to put BJP president Amit Shah in the dock over his claim that 250 terrorists were killed in the Indian airstrikes in Pakistan, asking him why Prime Minister Narendra Modi was "silent" over it.

"BJP chief Amit Shah is arduously making a claim that IAF strike had killed over 250 terrorists in Pakistan but why his guru PM Modi who is always keen to take credit for everything is silent over it? Terrorists killed is good news, but what is the secret behind deep silence of PM over it?," Mayawati said in a tweet.

The IAF carried out the ''pre-emptive and non-military'' airstrike in less than two weeks after the Jaish terror attack in Pulwama in which 40 CRPF personnel lost their lives.

JeM had claimed the responsibility of the attack.

While speaking at an event in Ahmedabad, Prime Minister Modi had on Monday asserted that the terrorists will be hunted even if they hide deep underneath the Earth and asked his critics not to question the valour of the armed forces even if they are not willing to trust him.

IAF Chief Air Chief Marshal BS Dhanoa on Monday said the fighter planes had hit the target given to them but he cannot give the number of casualties suffered as it is for the government to do so.