PM Modi on Wednesday attacked Congress over its ''arrogance and insulting the verdict given the voters'' of the country while replying to the Motion of Thanks to the President's address in Rajya Sabha. 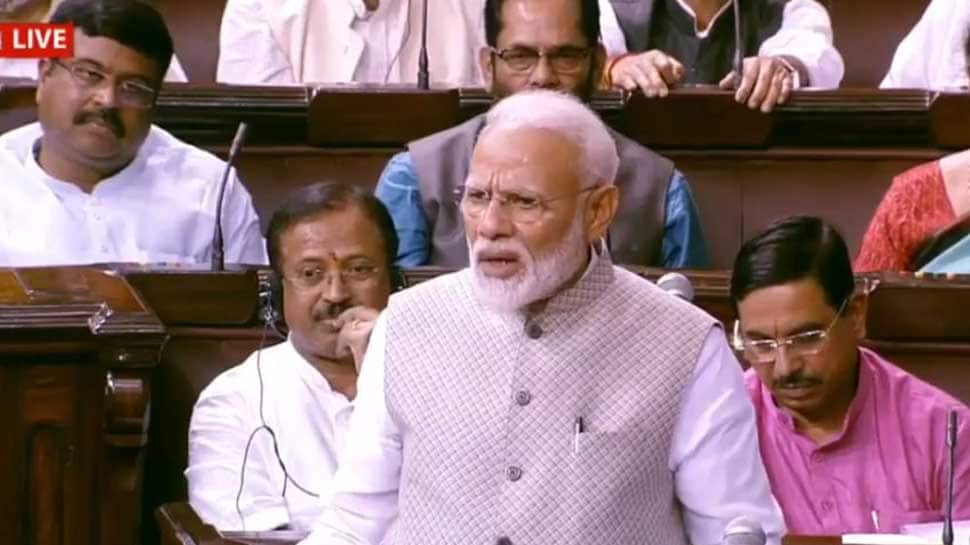 NEW DELHI: Prime Minister Narendra Modi on Wednesday made a scathing attack on the Congress party in the Rajya Sabha, saying that the grand old party never looked beyond the Nehru-Gandhi family and ignored its own great leaders like Sardar Vallabhbhai Patel and BR Ambedkar

Attacking Congress, the PM said that the grand old party has lost its ''connect'' with the voters and not been able to accept its own defeat in the recently concluded 2019 Lok Sabha polls.

Referring to the country's first Home Minister - Sardar Patel – the PM said that ''it is our thinking that if he (Sardar Patel) was the first PM of the country, there won't have been the issue of J&K won't have existed.''

''If Sardar Patel was the first PM, the state of our villages would have been far better than what it is today. We may be wrong in this but this is what we strongly feel. What cannot be wronged however is that it is Sardar Patel who, as Home Minister, ensured princely states were integrated with India,'' he said.

''Sardar Patel was a pue Congressman but I am amazed that the party only remembers him when there are elections in Gujarat. Otherwise, they have only ignored him, he was sidelined,'' the PM said.

The PM recalled that he had to once resort to hunger strike for Sardar Sarovar Dam in Gujarat.

"When we talk about water resources, I remember Babasaheb Ambedkar. It was Ambedkar who worked diligently on waterways and irrigation...Sardar Sarovar Dam was the brainchild of Sardar Vallabhbhai Patel. But, work on this dam kept getting delayed. As Gujarat Chief Minister, I had to sit on a hunger strike for this project. After the NDA came to power, the pace of work increased significantly and it is benefiting many people," he said.

Replying to the debate on the Motion of Thanks to the President's address, PM Modi said there was a limit to the ''arrogance of the opposition party'' as it has put voters in the dock by questioning their verdict.

The PM said that there is a problem with the Congress as it does not accept defeat and cannot digest victory.

PM Modi also slammed the Congress for imposing Emergency, insulting vital institutions like the judiciary and insulting people by putting them behind the bars.

In a stinging attack on the Congress, the Prime Minister said the Opposition party thinks only the Nehru-Gandhi family had contributed to the country’s progress and quipped that it had “risen” so much that it had lost ''connect'' with the voters.

PM Modi said the Congress cried foul when it lost the elections and blamed it on the Electronic Voting Machine (EVM).

Going by the Congress party's arguments, the PM wondered whether the victory of the Congress in Wayanad and Rae Bareli seats too was "defeat of the country".

"Due to narrow-mindedness and perversity of thoughts, if some people do not accept the mandate of the people by saying that 'you may have won the election but the country has lost', there can be nothing more insulting for our democracy than this," he said.

Noting that the Congress was not able to win even a single Lok Sabha seat in 17 states, he said it was ''time for the Congress to introspect and accept defeat".

"If you do not believe in yourself, you tend to find excuses," PM Modi said. The Prime Minister went on to say that the rules pertaining to EVM were formulated during the tenure of the Congress in 1992.

"You (Congress) had devised the rules and you are the only one who is blaming it for your loss in the elections," he said.

Praising BJP leaders for not lamenting over the party`s loss in previous elections, PM Modi said, "There was a time when we had just two MPs in Parliament. People made fun of us. But we worked hard and won the trust of people. We did not make excuses and blame the polling booth."

''In 2017, the Election Commission had invited parties on the issue of EVMs but only two parties --CPI and NCP accepted the offer. I appreciate them for going to the EC to learn more about the issue. But, why did the rest of the parties questioning the EVMs not even bother to go? They must answer this," the PM said in Rajya Sabha.

The PM further stressed that the electoral process in the country has improved significantly over the years. "In the 1950s, the polling process took a long time to complete. Violence and booth capturing were common in some places. Now, the news is about rising voter turnout. This is a healthy signal."

PM Modi wondered why opposition parties were opposing the idea of 'New India', asking them not to push the people of the country towards negativity by opposing it, as this was a sin.

He urged opposition members to take the country forward and expected them to contribute in doing so. PM Modi said those opposing EVMs are not only opposed to EVMs, but they also have problems with technology, digital transactions, Aadhaar, GST, Bhim App.

"Why such negativity? This negativity was one of the chief reasons why some parties have not been able to win people's trust," he said.

The Prime Minister also said that he was saddened by the lynching incident in Jharkhand.

"The lynching in Jharkhand has pained me. It has saddened others too. But, some people in the Rajya Sabha are calling Jharkhand a hub of lynching. Is this fair? Why are they insulting a state? None of us has the right to insult the state of Jharkhand," he said.

PM Modi noted that whether it is Jharkhand, or West Bengal or Kerala, incidents of violence should be treated in the same manner and perpetrators of violence get a lesson that the entire country is one on this issue.

Amit Shah in Srinagar for two-day visit, to review security arrangements in J&K