Efforts to 'placate' Rahul Gandhi and make him reconsider his decision to step down as party chief are on in full swing. 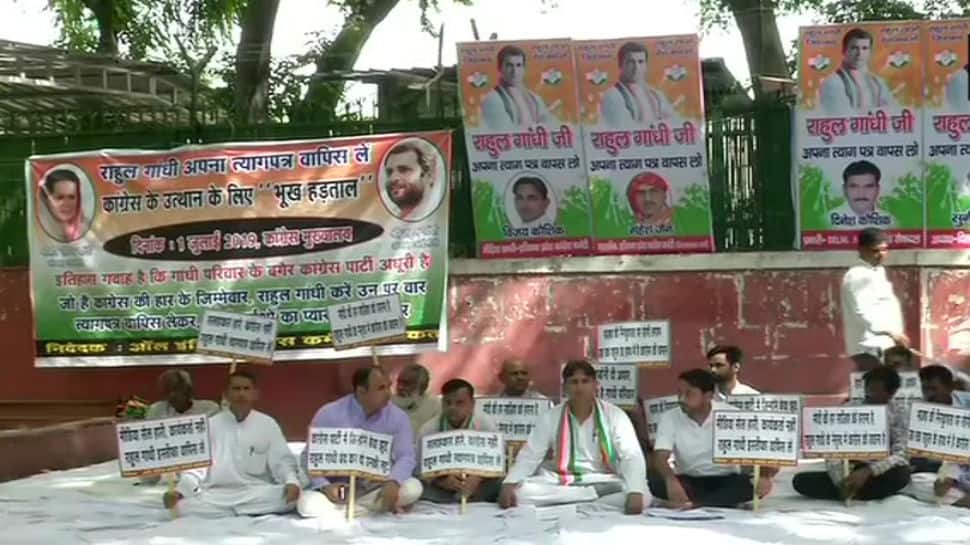 Rahul had said shortly after Congress' drubbing in Lok Sabha election 2019 that he would step aside as party president. It was a decision that was passionately opposed by several party leaders as well as workers. He, however, remained steadfast with reports even suggesting Rajasthan CM Ashok Gehlot could take over from him. A final decision - one way or the other - has remained elusive as an official confirmation remains awaited. In the meantime, several workers of the party have urged Rahul to not step down from the top post of Congress. Many of them camped outside party headquarters in New Delhi on Monday and began a hunger strike. Displaying placards which had messages blaming Congress' media cell for the electoral defeat to those targeting Prime Minister Narendra Modi, the workers began their efforts to make Rahul change his mind.

Delhi: Congress workers sit on hunger strike outside party Headquarters, urging Rahul Gandhi to take back his resignation from the post of party President. pic.twitter.com/pqlI5ulZnV

This comes shortly before several Congress CMs are scheduled to meet Rahul in what is their collective effort to convince him to continue with his responsibilities. It has been reported that Gehlot, MP CM Kamal Nath, Chhattisgarh CM Bhupesh Baghel and Puducherry CM V Narayanasamy will meet Rahul, apart from senior party leaders.

Rahul has had to face enormous flak after Congress could only secure wins in 52 seats in the Lok Sabha election earlier this year. Rahul lost in his family bastion of Amethi to Bharatiya Janata Party's Smriti Irani but secured a win from Wayanad. This once again gave the opportunity to the BJP to target Congress over its emphasis on dynasty. The party maintains that there is no sense of ownership within the Congress despite its string of humiliating defeats under Rahul.