According to Health Ministry, at least 505 new COVID-19 cases and 11 deaths have been reported since Saturday. 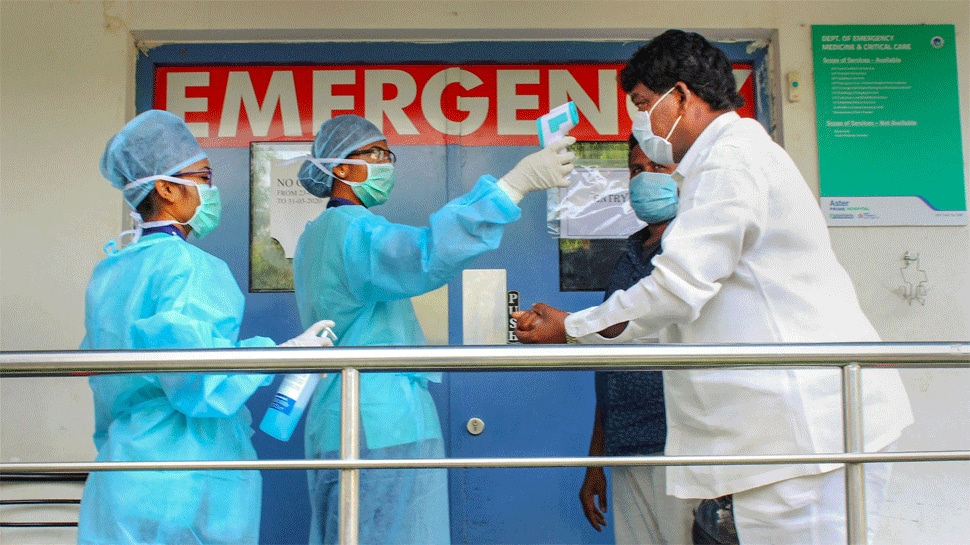 New Delhi: As many as 505 new COVID-19 cases have been confirmed and 11 more deaths reported, taking the total number of cases in the country to 3,577 and the death toll to 83, the Health Ministry said on Sunday. Addressing a media briefing, Joint Secretary in the ministry Lav Agarwal said 472 new COVID-19 cases and 11 deaths have been reported since Saturday. The total coronavirus cases stand at 3,374 and the death toll now stands at 79. He said 267 people have recovered.

In Uttar Pradesh, the Coronavirus tally has risen to 276 with 48 new cases testing positive on April 5. Sixteen persons have tested positive for coronavirus at the King George`s Medical University in Lucknow. Three more persons in Agra tested positive, taking the total number of positive cases in the district to 48.

Chief minister Yogi Adityanath said on Sunday that District Magistrates would be held responsible if people go without food.

In Maharashtra, as many as 113 people tested positive for coronavirus in Mumbai on Sunday (April 5), taking the total number of such cases in Maharashtra 748, state Health Minister Rajesh Tope said. According to a health ministry data, the death toll in Maharashtra due to Coronavirus increased to 45 after 13 new deaths were reported on Sunday, 8 in Mumbai, 3 in Pune and 1 each in Kalyan, Dombivali and Aurangabad.

According to officials, so far 56 people have been treated and discharged in the state after recovering from the disease.

In Jammu and Kashmir, at least 14 more tested positive for the deadly virus on Sunday, taking the total number to 106. Out of these positive cases, four have completely recovered while two succumbed in the hospital, leaving the number of active cases in J&K at 100 out of whom 82 are in Kashmir division and 18 in Jammu division.

Two patients have died so far, four recovered and seven tested negative after undergoing treatment. These patients will undergo another test before they will be discharged from the hospital.

More than 28,000 people have been kept under surveillance, including 10,600 who are either on government-established quarantine facilities or in home isolation.

In Tamil Nadu, 86 new COVID-19 cases reported in the state on Sunday, 85 of which wer jamaat conference attendees. With this, the total number of positive cases in the southern state reached to 571; while the death toll stood at 5. A total eight people have been treated and discharged in the state till date.

In Haryana, six new patients were registered in the state on Sunday, five from Muslim-dominated Nuh, taking the total coronavirus patients to 76, the government said. According to the state`s medical bulletin, the total patients comprised four are from Sri Lanka and one from Nepal. Gurugram saw the highest number of 18 cases, followed by Palwal (17), Faridabad (14), Nuh (eight) and Panipat (four). So far one death is reported in the state from Ambala city at the PGIMER in Chandigarh.

Coronavirus cases in Punjab rose to 68 after three more persons tested positive for deadly infection on Sunday. The state has also reported six deaths so far. The three new positive cases are from Ludhiana, SAS Nagar and Barnala. The person found positive in Ludhiana had attended a Tablighi Jamaat event in Delhi. A total of 241 Tablighi Jamaat attendees have been traced in Punjab and among them, seven have tested positive for novel coronavirus.

Jharkhand reported third coronavirus case on Sunday. The third case is of a woman from the Bokaro district. She had attended a religious congregation in Dhaka, Bangladesh. She had returned to Bokaro with husband on March 15. She tested Covid-19 positive on Sunday. Several others from Telo village, under the Chandrapura police station of the Bokaro district too had visited Bangladesh.

Eight new cases on Sunday have taken the total number coronavirus positive people under treatment in Kerala to 256. According to Kerala Health Minister KK Shailaja, 314 people have been cured. On two deaths reported previously, the Minister said they had other serious underlying ailments as well.