The MEA on Thursday termed Pakistan's reported crackdown on JuD chief and 26/11 terror attack mastermind Hafiz Saeed and several others as ''cosmetic steps'' and reiterated that New Delhi will not be fooled by such ''half-hearted measures''. 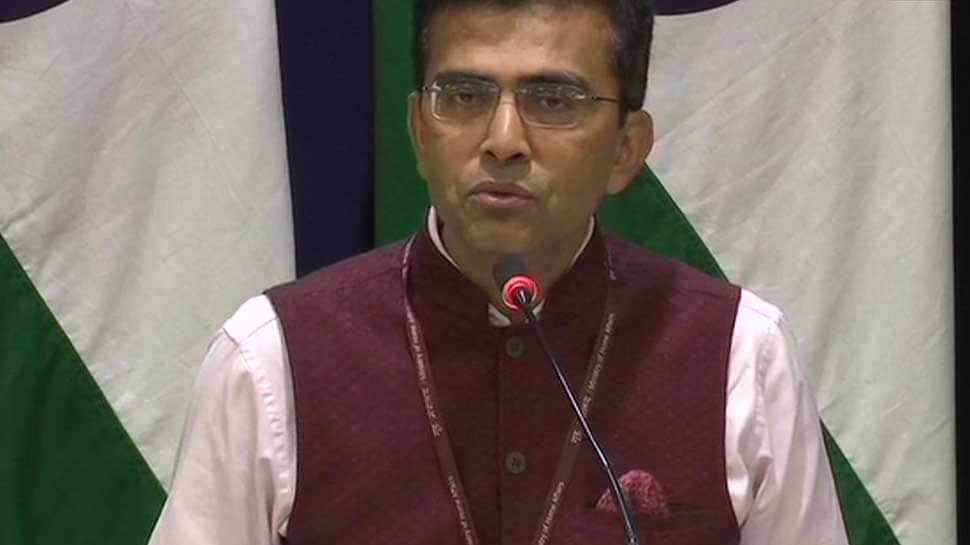 NEW DELHI: The Government of India (GoI) on Thursday termed Pakistan's reported crackdown on Jamaat-ud-Dawah (JuD) chief and 26/11 terror attack mastermind Hafiz Saeed and several others as ''cosmetic steps'' and reiterated that New Delhi will not be fooled by such ''half-hearted measures''.

Addressing a press conference here, Ministry of External Affairs (MEA) spokesperson Raveesh Kumar said, ''Let us not get fooled by such cosmetic steps. Pakistan's sincerity to take action against terrorists and terror groups will be judged on the basis of their ability to demonstrate verifiable, credible and irreversible action against terror groups operating from their soil and not on the basis of half-hearted measures which they undertake sometimes to hoodwink the international community. We want a normal relationship in an environment free from terror.''

The extremely critical remarks from the MEA came in the light of reports that that Hafiz Saeed and several other members of his outfit were booked on charges of terror financing by the Counter-Terrorism Department in Pakstan's Punjab province on Wednesday.

The action against Saeed and his aides was taken just ahead of the crucial financial bailout meeting in Pakistan.

Sources had told Zee Media that the CTD had filed cases against Saeed and other members of his organisation in this connection.

Replying to a question on reports claiming that fugitive underworld don Dawood Ibrahim, who is wanted in India in connection with the 1993 Mumbai serial blasts, is hiding in Pakistan, the MEA official said, ''The location of Dawood Ibrahim is not a secret. Time and again, we have been presenting to Pakistan a list of people who are in their country. We've asked repeatedly that he should be handed over. His imprint on the Mumbai blast is very clear for all of us to see.''

''You (Pakistan) claim that you've taken action but when it comes to taking action against people who we have demanded you go into denial mode. On the other hand, you try to project to the international community that you are taking some action against the terrorists operating from the soil. This basically is a case of double standards, this is something where they stand completely exposed as far as their claims of taking action against terror groups in Pakistan is concerned,'' the MEA spokesperson added.

It may be recalled that Dawood Ibrahim's most trusted aide and a prominent D-company member Jabir Motiwala had told the FBI agents that his boss was comfortably living in Pakistan and running his international crime syndicate from there.

To a question on India-Pakistan talks on the Kartarpur Corridor, the MEA official said, ''We had proposed a set of dates. Pakistan agreed they'll come for dialogue on July 14. There are certain differences, we'll discuss those issues. It's important to emphasize it's a matter of sentiment, it's a matter of fulfilling wishes of Sikh community.''

Replying to a question on trade-related tensions between India and the United States, Raveesh Kumar said, ''On trade-related issues, Foreign Secretary did mention in his briefing that the two sides will meet very soon. And I understand that the Ministry officials from the two sides are going to meet in the next couple of weeks.''

''The broad trajectory of the relationship between India and the US remains positive. The discussion PM Modi had with Donald Trump in Osaka was very open and productive. In any multi-dimensional relationship there are bound to be certain difference...What we agreed was to continue to talk on all issues,'' he added.

Managar steals 58 kg gold from his own jewellery shop, arrested