Could not sleep after Chandrayaan 2 lander failed to land on lunar surface: PM Modi to students during Pariksha Pe Charcha 2020

Prime Minister Narendra Modi on Monday (January 20) said that he was unable to sleep on the night when Chandrayaan 2's Vikram lander failed to land on the moon's surface successfully. 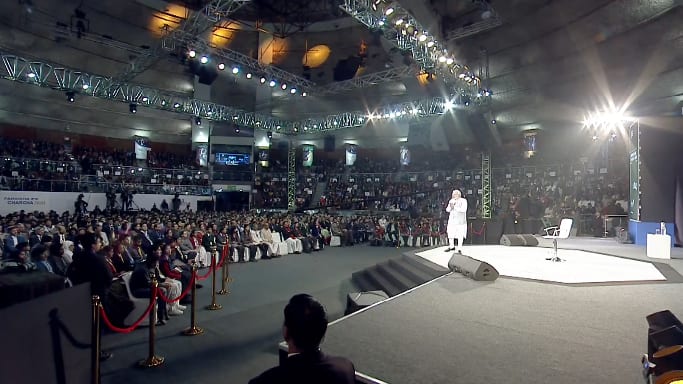 Prime Minister Narendra Modi on Monday (January 20) said during his 'Pariksha Pe Charcha' programme in New Delhi that he was unable to sleep on the night when Chandrayaan 2's Vikram lander failed to land on the moon's surface successfully.

The prime minister also revealed that he was advised by some people not to attend Chandrayaan 2 launch mission, saying 'there is no surety, what if it fails' but he told them that is the reason I must visit ISRO.

Addressing the students at Delhi's Talkatora Stadium, PM Modi said that he went to the hotel after the scientists at Indian Space Research Organisation (ISRO) confirmed that Vikram lander has lost contact with ISRO headquarters but he was not disappointed with this development. The prime minister added that he then called the officers of PMO to his room and asked them to fix a time of his meeting with ISRO scientists the next morning.

PM Modi said that he then went to meet the scientists and appreciated the Chandrayaan 2 team for the mission and this changed the mood of the whole nation. The prime minister told students that the incident taught him that we can learn lessons of success even from our failures.

"I could not sit in peace. I summoned the PMO team and changed the schedule. I met the scientists early morning the next day. I shared my emotions with them and lauded their efforts. Basically, we can find an education about success in failures," said PM Modi

Encouraging those behind Chandrayaan 2 mission, PM Modi had said that “there will be a new dawn and a brighter tomorrow very soon”. Referring to the loss of contact when the Vikram Lander was just 2.1 km away from Moon, the Prime Minister said, “We might not have reached the surface of moon as per our plan, but a poet will describe this situation as – Chandrayaan-2 was in a hurry to meet the moon and hence it rushed towards it.”

Asserting that “science is never satisfied with results”, the prime minister had said, “Today I can proudly say that the effort was worth it and so was the journey. Our team worked hard, travelled far and these very teachings will remain with us. The learning from today will make us stronger and better.”