The CWC is meeting for a second time in a day to pick a new president for the Congress party. 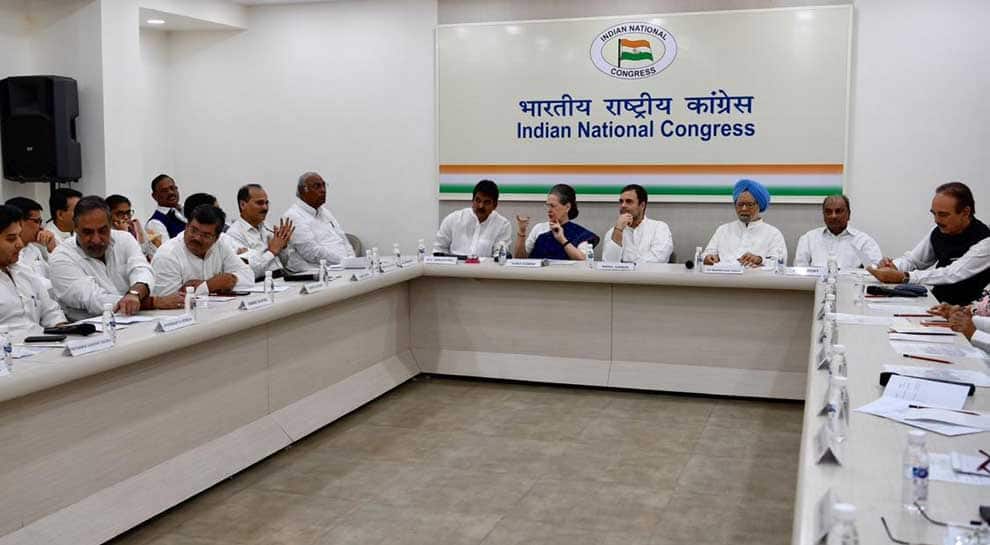 NEW DELHI: A crucial meeting of the Congress Working Committee (CWC), which is the party's top decision-making body, is currently underway for a second time in a day on Saturday to take a call on who would succeed Rahul Gandhi as the party chief.

UPA chairperson and former party chief Sonia Gandhi is present at the meeting, which is most likely to take a final decision on basis of the suggestions made by state leaders and the leaders representing five zonal units after their day-long discussion.

Ahead of the CWC meeting, Sonia Gandhi addressed a prayer meet for late Congress leader Sheila Dikshit and said, ''She stood by my side in my darkest years. Later, when I was able to come out of my sorrow, she urged me to take the responsibility of presidentship of the Congress party and when I took it, she was there guiding me as an elder sister.''

Sonia Gandhi at prayer meet of Sheila Dikshit in Delhi: She stood by my side in my darkest yrs. Later, when I was able to come out of my sorrow, she urged me to take the responsibility of Presidentship of the Congress party&when I took it, she was there guiding me as elder sister pic.twitter.com/qUkYiP0AA1

This morning, Sonia Gandhi and Rahul Gandhi had excused themselves from the zonal meetings, saying they cannot be part of the selection process.

Rahul Gandhi had announced his decision to quit the party's top post in May after its disastrous performance in the Lok Sabha election.

Interestingly, many of the subgroups formed for consultations among state unit party leaders have endorsed Rahul Gandhi to lead the party.

A senior leader present in the previous meeting, that lasted from 11.10 AM to 1.15 PM, said, "The CWC members urged Rahul Gandhi to reconsider his decision to resign but he remained adamant on quitting."

Jyotiraditya Scindia then asked Rahul Gandhi to take some more time to reconsider his decision.

In his response, Rahul Gandhi said he was not escaping from the responsibilities of the party, but believed that after a new president is chosen, he will get more time to work for the party. Earlier in the day, after emerging from the meeting, Sonia Gandhi told reporters that she and Rahul Gandhi are not part of the five sub-groups formed in the CWC to elect the new party chief.

When reporters told her that her name is present in the five region-wise groups formed to hold consultations, she said, "Rahul and I cannot participate in the election of the new party chief. Putting our names is not good."

Rahul Gandhi told reporters, "I am going to Wayanad tomorrow for two days as the condition is very disturbing there" due to heavy rains.

The CWC met this morning to elect a new party chief after Rahul Gandhi quit the post following the party`s miserable showing in the Lok Sabha elections.

The party informed those leaders who could not attend, including Punjab CM Amarinder Singh, that they would be contacted over phone and their recommendations would be noted.

The CWC members said that they would meet around 9 PM to get final recommendations of the five groups.

However, a senior party leader said that the name of a new Congress chief will be finalised on Sunday.

Addressing media, Congress national media in-charge Randeep Singh Surjewala said, "The CWC unanimously appealed to Rahul Gandhi to lead the party as he is the best person for the top post at a time when the BJP-led government is assaulting democracy and undermining peoples` rights."

"His resignation is still pending approval of the CWC. But he is adamant on his decision, so a group has been formed for consultation with the party leaders to decide on the new chief," Surjewala said.

Surjewala said the CWC has not accepted Rahul Gandhi`s resignation yet.