The video had been shot during Rajnath`s stay on INS Vikramaditya from Saturday afternoon till the forenoon of Sunday. 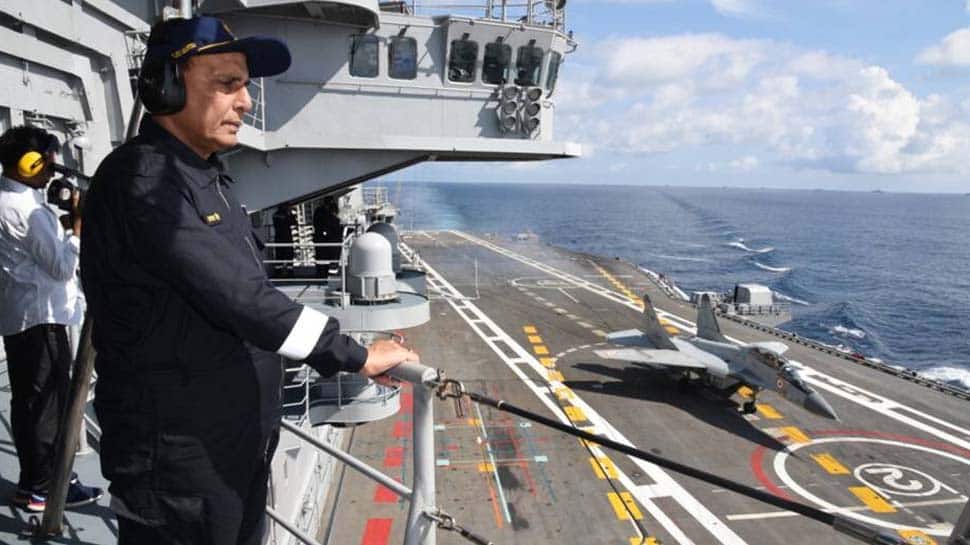 New Delhi: The office of Defence Minister Rajnath Singh released a video clip of him on Monday in which he is seen singing the anthem of INS Vikramaditya onboard the aircraft carrier along with the crew of the ship. The 2:19 minutes-long clip was posted on the Twitter handle of the Defence Minister`s office.

Dressed in a dark outfit, Rajnath Singh can be seen humming the anthem "Nau Sena ke samman mein, uske garima aur shaan mein" in a packed house on board the INS Vikramaditya.

"The anthem is that of INS Vikramaditya. It has been written and composed by the crew of the aircraft carrier," a senior Navy officer informed.

As per Navy officials, the video had been shot during Rajnath`s stay - `day-on-sea` - on INS Vikramaditya from Saturday afternoon till the forenoon of Sunday.

Rajnath also took part in yoga practice with the crew of the ship on Sunday morning. He had boarded the aircraft carrier from Mumbai on Saturday after commissioning India`s second Scorpene-class attack submarine at Mazagon Docks.

The Western Fleet of the Indian Navy demonstrated its prowess and firepower to the Defence Minister during his 24-hour stay on the ship.

"Spent 24 hours at INS Vikramaditya. This Aircraft Carrier is the `Sikandar of Samundar`. Visiting `Vikramaditya` was one of the most memorable experiences of my life. A Day at Sea has given me a new perspective about the capabilities and power of the @indiannavy," Rajnath tweeted.