Here's a roundup of top stories from the world of politics, sports, and entertainment, which grabbed the spotlight and trended the most on various social media platforms on February 26. 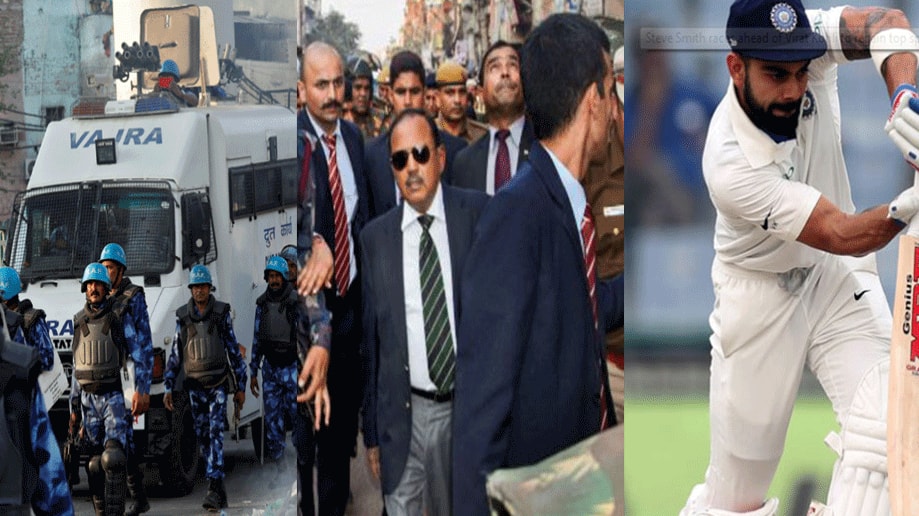 Here's a roundup of top stories from the world of politics, sports, and entertainment, which grabbed the spotlight and trended the most on various social media platforms on February 26.

National Security Advisor (NSA) Ajit Doval on Wednesday (February 26) visited some riot-hit areas in North East Delhi and said that the situation "is under control and people are satisfied." The NSA appealed to the people to have confidence in law enforcement agencies and remarked that police is on high alert and is doing its job. Read here

2. Here's how Balakot airstrike became 'Bandar', inside story from the man who executed the daring operation

The Central Board of Secondary Education (CBSE) on Wednesday issued a notice announcing the postponement of the Class 12 board exams which were scheduled for Thursday (February 27) with their centres in violence-affected northeast Delhi. Read here

In the wee hours of February 26, 2019, the Indian Air Force (IAF) jets bombed the Jaish-e-Mohammad (JeM) terror camps in Balakot in Khyber Pakhtunkhwa of Pakistan and avenged the Pulwama terrorist attack. India on February 14, 2019, was shaken by what can be defined as one of the deadliest terror attacks on its soil in recent times. Read here

Rampur: Samajwadi Party MP Mohd Azam Khan, his wife Tanzeen Fatima and son Abdullah Azam were sent to seven days of judicial custody after they surrendered in the district court on Wednesday. The next hearing of the case will be on March 2. Read here

Sports News of the day

Captain Harmanpreet Kaur's team is flying high after defeating four-time champion Australia followed by the victory over Bangladesh in ICC Women's T20 World Cup Group A matches. The Indian women cricket team's two wins in as many matches have propelled it to the top spot in the group and the Women in Blue now await New Zealand, also known as White Ferns, in their third league match on Thursday (February 27, 2020) at Melbourne. The match starts at 9:30 am Indian Standard Time. Read here

Australia star Steve Smith is back on top of the list of batsmen in the MRF Tyres ICC Test Player Rankings after India captain Virat Kohli failed to live up to his name in his two innings in the first Test against New Zealand in Wellington. Read here

Entertainment News of the day

9. Bigg Boss 13 winner Sidharth Shukla and Shehnaaz Gill back together- This pic is proof

New Delhi: Popular reality show 'Bigg Boss 13' ended on a high note with Sidharth Shukla lifting the winner's trophy. Asim Riaz stood second while Shehnaaz managed to bag the third spot respectively. All those who watched the show can safely say that this season was full of entertainment. Read here

Chennai: Tamil actress Rekha's shocking revelation about the "unplanned kiss" by actor Kamal Haasan in filmmaker K. Balachander's 1986 film "Punnagai Mannan" has raised a storm on social media. Many netizens have said that the veteran superstar Kamal Haasan should apologise to the actress for the kiss that, she added, was filmed on her without her consent when she was just 16. Read here

Tags:
Top news of the dayTop news for todayTop news stories
Next
Story