Zee News Editor-in-Chief Sudhir Chaudhary on Monday (September 13) discussed humans’ desire to conquer death and how far they are willing to go to achieve it. 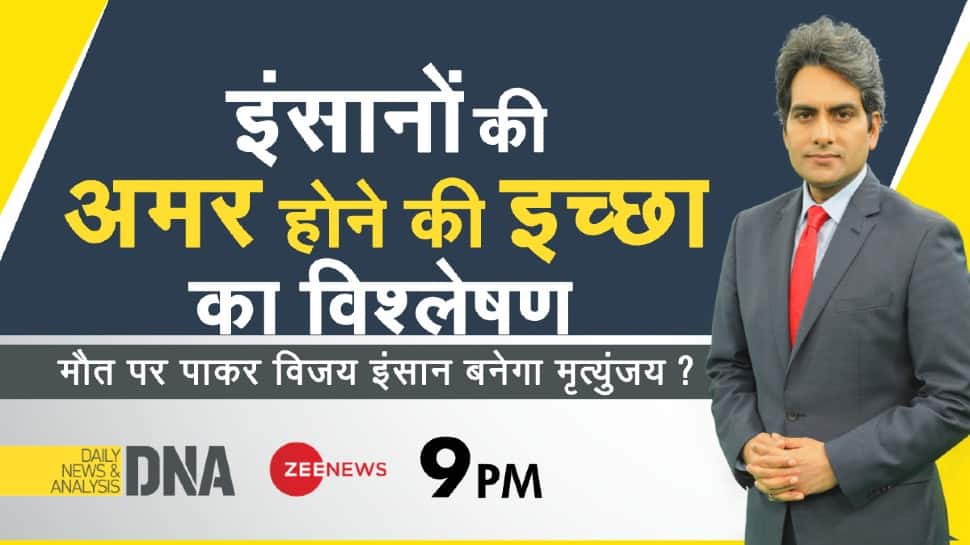 New Delhi: Human beings’ desire to live forever is not something new. Since time immemorial, humans have tried to find out ways to achieve immortality. And the search continues to date. Many scientists are conducting research in this area and none other than the world’s richest person, Jeff Bezos, is funding one such group seeking to find a way to cheat death.

Zee News Editor-in-Chief Sudhir Chaudhary on Monday (September 13) discussed humans’ desire to conquer death and how far they are willing to go to achieve it.

Bezos has invested in a company called Altos Labs which is trying to find a way to make humans immortal. The company aims to do this through ‘cellular reprogramming’ which means reprogramming human cells to make them new again.

A human body is made up of 724 trillion cells. Most of these cells die over time and the body is unable to make new cells in proportion to compensate for the loss. This is what is called getting old.

The scientists at Altos Labs are conducting research under which the old cells in the human body will be converted into Stem cells, and then new cells will be created with the help of these Stem cells. Stem cells are in a way the raw material from which the body and different parts of the body are made. With the help of these, special types of new cells can be made for different parts of the body.

Some of the scientists working on the project are Nobel Prize winners. At present, the scientists hope they will be able to increase the lifespan of humans to at least 50 years, that is, a person who would normally live 80 years will be able to live up to 130 years. But in the future, with the help of this technology, efforts will be made to make humans immortal.

This dream of making humans immortal is not just based on cell reprogramming. According to American scientist Raymond Kurzweil, by the year 2030, a certain kind of nanorobots will be invented which can be released in the human body along with the bloodstream. These nanorobots would be able to eliminate viruses, bacteria, clean the blood, prevent clotting, and even kill tumors in the body, and repair your cells if needed.

Jeff Bezos is not the only industrialist to invest in the dream of being immortal. Several big industrialists around the world are going to invest Rs 45 lakh crore on this.

The famous Israeli writer, Yuval Noah Harari, wrote in his famous book Homo Deus that for religious people, death may be a decision made by God. But for scientists, death is merely a technical glitch in the body. He says that scientists can correct this technical glitch in labs and death can be avoided.

This is not the first attempt by humans to achieve immortality, but humans have been trying to stop aging and make themselves immortal for thousands of years.

It is written in the scriptures that drinking ‘Somras’, which is obtained from a rare plant named Soma, can make humans immortal. But this plant is very rare. Scholars and Ayurveda experts believe that this plant is found only in present-day Afghanistan.

2200 years ago, Qin Shi Huang established the largest empire in China. After that, he started dreaming of becoming immortal. He ordered all the doctors of his kingdom to find and bring the medicine to become immortal. It is said that mercury was discovered in China at the same time. Some physicians thought that it was a kind of elixir. They started administering mercury to the emperor in small quantities. However, mercury is actually very poisonous and that is why within a few months the emperor died. He was just 40.

About two thousand years ago, there used to be a famous queen in Egypt named Cleopatra. It is said that she was very beautiful and that she used donkey's milk to keep her so. Strangely, donkey’s milk is once again being sold in the market and it costs between 5 and 10 thousand rupees per liter. It is used extensively in beauty products as well.

Psychologists believe that the desire to always look young has always been there in humans. The human body starts aging but they do not want to accept that their body is not as capable as before and that one day the body will die.

At this point, it is hard to predict if and when science will conquer death. But if one really wants to be immortal, they can make their life so memorable that even after they are gone, the things and memories related to them will endure.