The agitating doctors had on Saturday turned down an invite for a closed-door meeting with Banerjee. 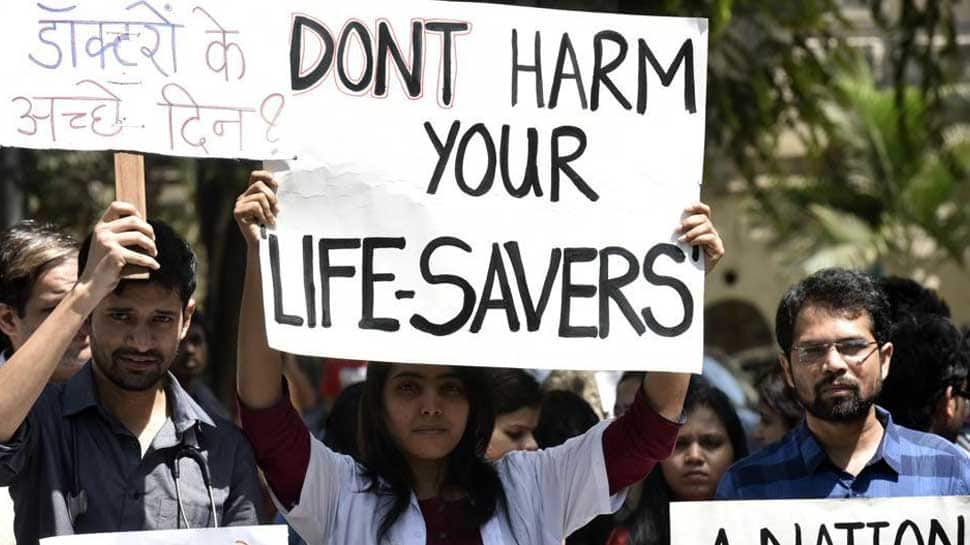 Kolkata: Despite assurance from the West Bengal Chief Minister Mamata Banerjee, the junior doctors continue their ongoing strike on Sunday and said that they are ready to meet her but the venue of the meeting would be decided later. With this, the impasse in West Bengal showed signs of easing as agitating doctors apparently softened their stance and agreed to meet the state's Chief Minister even as they continued to press for more security at their workplace.

The state government had on Saturday stated that it wants to end the stalemate situation, adding that all the 'practical' demands of the protesting doctors will be met.

The agitating doctors had on Saturday turned down an invite for a closed-door meeting with Banerjee at the state secretariat and had instead asked her to visit the NRS Medical College and Hospital for an open discussion to resolve the impasse.

Late on Saturday night, the joint forum of junior doctors held a press conference their meeting.

"We are open for dialogue always. If the chief minister extends one hand we will extend 10 of ours... We are eagerly waiting to break the deadlock," the spokesperson said.

Junior doctors of #NRSMedicalCollege and Hospital, Kolkata, West Bengal: This has become an ego fight for the CM but for us it's a fight for survival. We wanted her to meet the assaulted doctor Paribaha Mukhopadhyay. It wasn’t a spontaneous attack, it was a planned attack. pic.twitter.com/e4VRIiFyr8

The agitating doctors said they would wait for their governing body to decide on the proposed venue for the meeting.

The agitating doctors had also turned down Banerjee's request saying there was no honest effort on her part to break the deadlock.

"We are eagerly waiting to start our duty, but from the chief minister's side there is no such honest initiative to find a solution (of the ongoing problem)," he had said earlier in the night.

The agitating junior doctors also rubbished her claims that a few of their colleagues visited her at the state secretariat.

Junior doctors of #NRSMedicalCollege and Hospital, Kolkata, West Bengal: Our occupational hazard is, being affected by Hepatitis and HIV while treating patients, but we never complained or sat on a dharna for this. This (attack on doctor) can't be termed as an occupational hazard https://t.co/D2T46vdGEj

Banerjee, during a press conference at the state secretariat, had urged the agitators to resume work and said her government has accepted all their demands.

The Ministry of Home Affairs issued an advisory seeking a report on the stir. But she reacted sharply to it and said such advisory should be "sent to states like Uttar Pradesh and Gujarat where several murders are reported since the last couple of years".

Bengal Governor KN Tripathi wrote to Banerjee advising her to take immediate steps to provide security to the medicos and find out a solution to the impasse.

Banerjee later said that she has spoken to the Governor and apprised him about the steps taken by the state government to resolve the impasse.

She also said her government has not invoked the Essential Services Maintenance Act (ESMA) even after five days of the strike by the junior doctors.

"We have the laws, but we do not want to use them... We are not going to take any stringent action against any of the agitating junior doctors and hamper their career," she told a news conference after the agitators did not turn up for a meeting at 5 PM.

The strike began on Monday night when two junior doctors of NRS hospital were injured in an attack by relatives of a patient, who died.

Banerjee said, on Friday, she "waited for the junior doctors for five hours. And today, I cancelled all my programmes for them. You must show some respect to the constitutional body".

On the mass resignation of the doctors across the state, she said it was not legally tenable.

"If the junior doctors think I am incapable, they can always talk to the governor or the chief secretary... Or the commissioner of police," she said.

In its advisory, the MHA said it has received a number of representations from doctors, healthcare professionals and medical associations from different parts of the country for their safety and security in view of the strike in West Bengal.

Patients in Delhi, Mumbai, Kolkata, and many other cities faced hardships as the protest by doctors, in solidarity with their striking colleagues in Bengal, continued in several government hospitals.