EXCLUSIVE: ‘Aftab Poonawalla threatened to KILL me, CUT me into pieces’ - Shraddha Walkar told police in 2020

Shraddha Walkar murder case: According to the letter, accessed by Zee Media, Shraddha Walkar had told Delhi Police in her complaint in 2020 that she was being threatened by her boyfriend and that she feared for her life.

NEW DELHI: An old letter written by Shraddha Walkar, the 26-year-old Mumbai girl who was brutally killed by her live-in partner Aftab Amin Poonawalla in Delhi in May, has now come to the fore. According to the letter, accessed by Zee Media, Shraddha had told police in her complaint in 2020 that she was being threatened by her boyfriend and that she feared for her life.

"He threatens to kill me, cut me up in pieces, throw me away," she had stated in the letter to the police. “He has been abusing me and beating me up. Today, he tried to kill me, suffocating me and he scares and blackmails me that he will kill me and cut me up in pieces and throw me away. It has been 6 months since he has been hitting me I did not have the guts to go to the police because he would threaten to kill me. His parents are aware but still, he beats me and threatens to kill me,’’ she added in her letter. 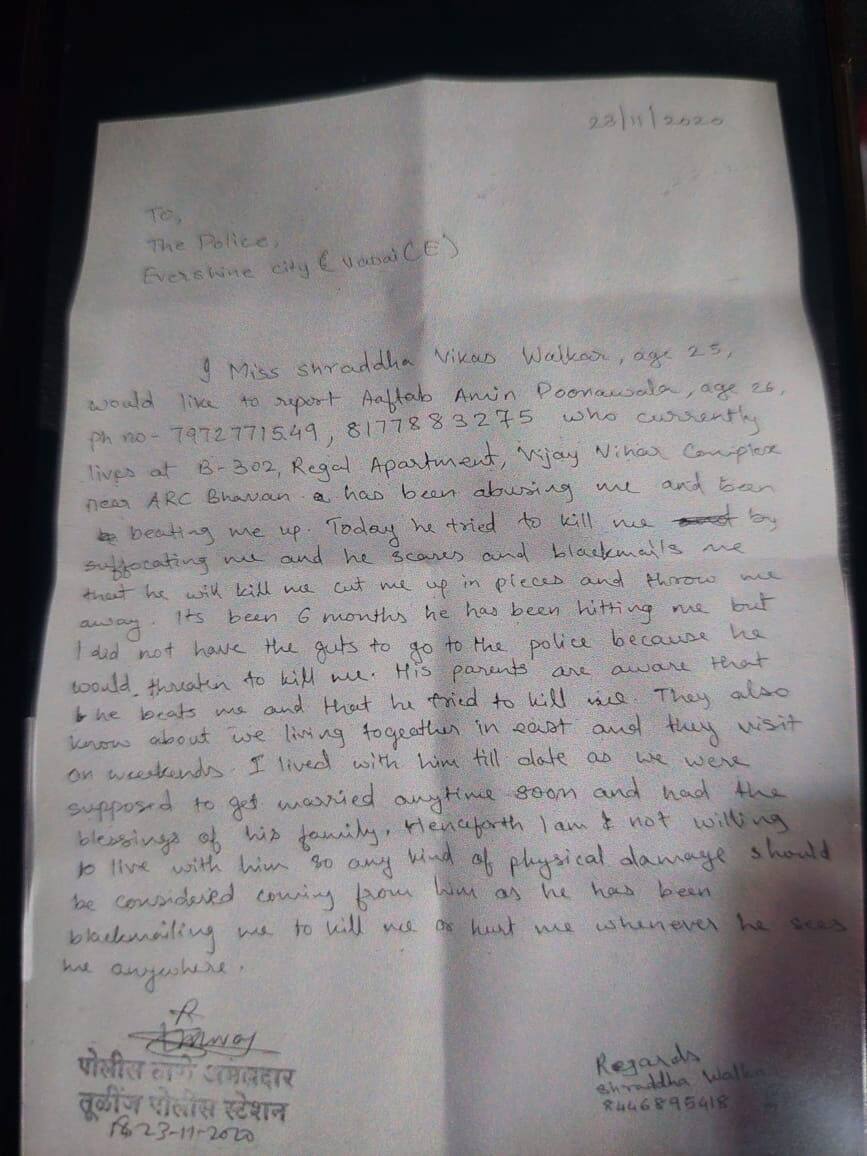 ''They (Aftab's family) are also aware that we are living together in Delhi and they visit us on weekends. I lived with him till date as I expected to get married anytime soon and receive the blessings of his family. However, I am not willing to live with him anymore and any kind of physical damage should be considered coming from him as he has been blackmailing me, threatening to kill me, hurt me whenever he sees me anywhere,” she wrote in her letter.

'Killed Shraddha In A Fit Of Rage'

Aftab Amin Poonawalla had on Tuesday told a Delhi court that he murdered his girlfriend Shraddha Walkar in the "heat of the moment". The Saket court later extended his police custody to four more days after he was produced before the court via video conferencing in a special hearing.

Aftab Poonawalla, the man who is accused of killing his live-in partner Shraddha and chopping her body into 35 pieces in Delhi`s Mehrauli area, is likely to undergo the Polygraph test at the forensic science laboratory (FSL) in Rohini on Wednesday, according to sources.

The officials from FSL, as per protocol, also went to the court on Tuesday to verify the order of the copy for a polygraph test. In the court, the judge allowed police to go ahead with the polygraph test to unravel the truth, while another court extended Aftab`s police custody by four more days. Sources were quoted as saying by news agency IANS that police teams will try to conduct both the tests - Polygraph and Narco - within the next four days.

Meanwhile, Delhi Police Commissioner Sanjay Arora visited the South Delhi DCP`s office on Tuesday evening, where he spoke to the investigating officers and took stock of the ongoing probe. According to sources, the investigators have to now join the dots of the evidence collected so far, as they cannot conclude the probe on the basis of the statement given by the accused.

"Multiple agencies have been working on the case, and we will file a collective report in the court. The chargesheet will be filed on the basis of forensic evidence," said the sources. Aftab will also be taken to two ponds for the search of the body parts of Shraddha, one in the Mehrauli forest and the other in Maidangarhi.

Murder Weapon, Shraddha's Head Yet To Be Recovered

On Sunday, police teams recovered more human remains from the Mehrauli forest. They have so far sent 18 body bones, including the base of a skull and a decapitated jaw, for forensic examination.

To ascertain whether the bones are that of Shraddha, the blood samples of her father and brother have been collected for DNA analysis. However, the girl’s head, her blood-stained clothes and the weapon of the offence are yet to be recovered.