Flood situation worsens in north India, most other states battle to stay afloat

Emergency personnel across the country are working tirelessly to rescue and provide relief to people in need. 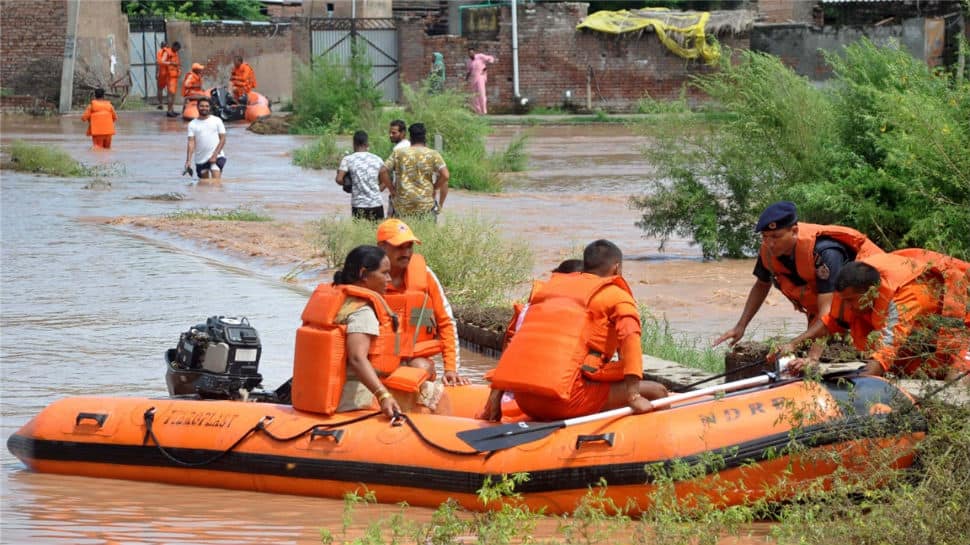 New Delhi: The monsoon season has brought immeasurable misery in most parts of the country with the brunt of it being borne by southern states of Kerala and Karnataka as well as by Maharashtra and Gujarat. In the past week, the situation has become quite alarming in north Indian states as well with most rivers here flowing well above the danger mark.

By Monday evening, official records from Kerala showed there had been 121 deaths this season due to flooding or incessant rainfall. While floodwaters have now begun receding from many parts here, the damage to land, property and life is stark. Malappuram is the worst affected district in the state with 58 people dead. The Kerala State Disaster Management Authority (KSDMA) data reveals that 26,668 people from 8,247 families are affected and the state government has set up 185 camps for them.

Karnataka too has been severely affected by floodwaters with at least 76 people dead in the past two weeks. While rain has abated, rescue and relief operations continue. A major reason for several districts of Karnataka flooding is believed to be Maharashtra opening its dams to release water. CM BS Yediyurappa also met Maharashtra CM Devendra Fadnavis earlier this month and asked him to control the outflow of water from dams in his state.

It is reported that Maharashtra had little option but to open its dams because the situation in the state has been every bit as dismal. At least 56 people have died due to floods here with the districts of Sangli and Kolhapur severely affected. While most of the rivers in the state are now flowing under the danger mark, communication lines in many areas remain paralysed.

Other states like Odisha, Assam and Bihar grappled against floods last month and are now slowly recovering from its horror effects.

Northern Indian states, however, are not so fortunate. While July was a tough month elsewhere, it was calm in the upper reaches of the country but all of that has dramatically changed now.

On Monday, Punjab state government declared the prevailing situation here as a natural calamity. Ropar and Phillaur are particularly affected with many villages in these two districts submerged under water. The Several rivers running through Punjab, including Sutlej, have swollen and some have even overflowed into agricultural and residential lands. The dams in the state have been opened up.

Haryana too has had to open the Hatni Kund Barrage from where more than 8 lakh cusecs of water has been released into the Yamuna in the past few days. Karnal is on high alert as Yamuna river here is flowing well over the danger mark. The river is also flowing above the danger mark in Delhi where 21,000 people were evacuated from low-lying areas by Tuesday. Drones and boats are being used to monitor the situation.

Most of the rivers in the adjoining state of Uttar Pradesh too are flowing above the danger mark. The situation is so alarming in Varanasi, where Ganga has inundated the ghats, that cremations are taking place in lanes of the holy city. Rivers Yamuna and Ghagra too are swelling up at a quick rate.

The hill states of Himachal Pradesh and Uttarakhand are faring no better with heavy showers and incidents of cloudburst causing deaths and damage. Kullu in Himachal has taken most of nature's assault with several homes washed away and the Manali-Kullu highway damaged at different points. CM Jai Ram Thakur has said that the damage to property this Monsoon season is estimated to be Rs 574 crore.

It has been tough going not just for people at large but for emergency personnel who have had to work overtime to reach places where they are needed. Heroic efforts from state department relief forces, National Disaster Response Force, personnel from the armed forces as well as paramilitary forces and dedicated local officials has ensured that death and damage are kept as less as is humanly possible.

Next major event on September 2: ISRO chief K Sivan explains the road ahead for Chandrayaan-2