According to Cinnathambi, coordinator of the traditional fishermen federation, the unusual foam and suspected pollutants are being washed along the shore over the last two days, in the Pamban-Gulf of Mannar region. 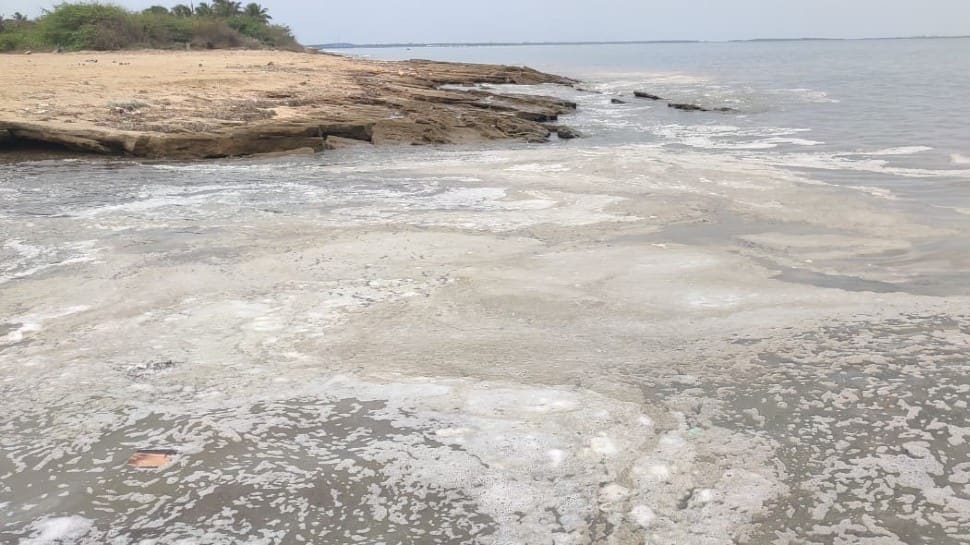 Chennai: Fishermen in the Rameswaram region of Tamil Nadu’s Ramanathapuram district have reported foul-smelling foam and what appears to be polluted water along the coast. Foam and thick polluted mixtures on the surface of the water were seen in images and videos. Fishermen in the region suspect that it could be something to do with the X-Press Pearl shipping disaster that happened off the Sri Lanka coast in February.

According to Cinnathambi, coordinator of the traditional fishermen federation, the unusual foam and suspected pollutants are being washed along the shore over the last two days, in the Pamban-Gulf of Mannar region. He added that such foam is spread almost 50-100 meters in the sea water and it spans a length of several kilometers along the coast.

When asked if this was the usual foaming that occurs during the rough seas and monsoon, he told Zee Media that there were what appeared to be bits of plastic washing ashore. He said that the fishing community was in a state of fear over these suspected pollutants, which did not appear to be weather-related foaming.

The preliminary suspicion among the fishermen community points towards the MV X-Press Pearl, which sunk off the Sri Lankan Coast (between Colombo and Negombo), despite successful firefighting efforts by the Indian Coast Guard and Sri Lankan authorities. Fears remain over the contents of its containers and the environmental impact that it could pose for the region.

There were several reports of tons of plastic pellets having washed onto Sri Lankan shores, besides the long-term impact o the chemicals being carried hundreds of kilometers way owing to the wind, ocean currents etc,

When it caught fire, the container ship was carrying 1486 containers containing chemical cargo, classified under International Maritime Dangerous Goods (IMDG). The ship caught fire around the last week of May and sunk in the first week of June. Among other chemicals, the IMDG cargo consisted of highly inflammable Nitric Acid, Methanol, Methyl Acetate, Sodium Hydroxide and Polystyrene beads. It must be noted that the distance between Rameswaram in Tamil Nadu and the location of sunken ship (off Sri Lanka) is barely 240 km.

It is understood that researchers from the Central Marine Fisheries Research Institute, Mandapam collected samples from the adjoining region that showed this suspicious foam. Zee Media has attempted to reach the institute but has received a response yet.

Mamata Banerjee calls Jagdeep Dhankar 'corrupt', Governor says 'will not be cowed down by little sister'