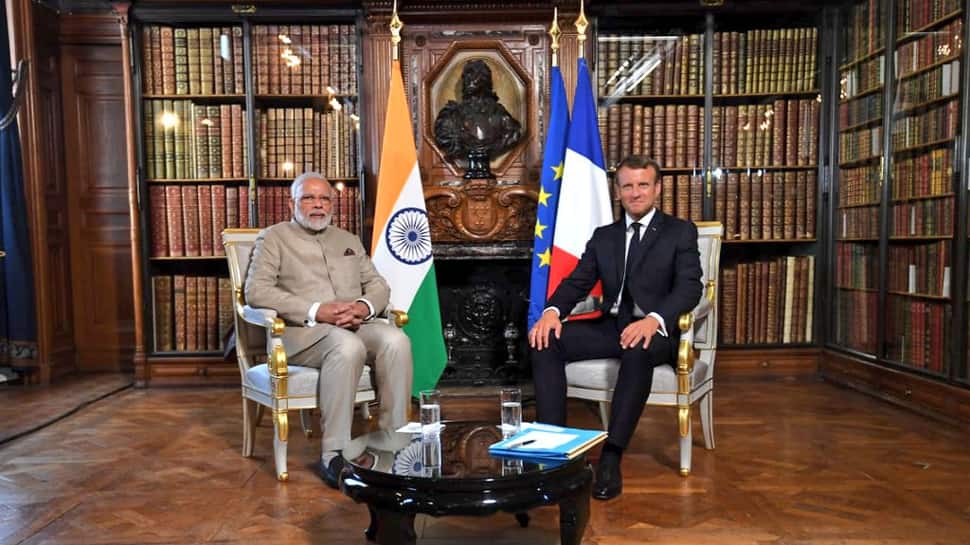 Paris: Prime Minister Narendra Modi and French President Emmanuel Macron on Thursday met for the fifth time with a focus on climate change, cybersecurity, defence and space cooperation and Paris backing New Delhi on Kashmir. Both sides also announced that the delivery of Rafale fighter jets will begin next month.

PM Modi said, "Our friendship rests not on selfishness, but on solid ideals of 'Liberty, Equality, and Fraternity'. This is the reason why India and France have stood shoulder to shoulder to protect freedom and democracy "

On Kashmir, French President said, "India and Pakistan have to resolve it bilaterally.. and no third party mediation can happen".

Adding, that he will tell Pakistani PM Imran Khan "that they (India and Pakistan) have to solve issue bilaterally and stability in the region should be maintained and no terror activities should happen" On Jaitapur nuclear power plant, he said, "by the end of this year we want to take the project ahead".

Indian Prime Minister Narendra Modi began his state visit to France on Thursday and will later participate in 45th G7 summit in Biarritz on 25th and 26th August. On India's participation at G7, Macron said, "It is a priority for us to talk about climate change and we will talk about it even during G7 meet. India has been very supportive and we need to go ahead with all other nations, to stop carbon emission and protect the environment."

PM arrived at Paris's Charles de Gaulle Airport on Thursday and on Friday morning will meet Prime Minister of Franch Édouard Philippe. He will address the Indian diaspora at the UNESCO Headquarters.

PM Modi visited France in 2017 followed by the visit of the French President in 2018 and then meetings on the sidelines of G20 summit in Argentina and Japan in December 2018 and June 2019, respectively.

Later, when he comes back from his visit to UAE and Bahrain, PM will represent India at the G-7 Summit in Biarritz from 25th to 26th where India is a special invitee by French President Emmanuel Macron.

It is after a gap of more than 10 years that India has been invited at the G7 summit, the last time being in 2005 when the then British Prime Minister Tony Blair had invited the then Indian Prime Minister Manmohan Singh at the Gleneagles summit.

India is "Biarritz partner" country along with Australia, Chile, South Africa, Rwanda, Senegal, Egypt and Burkina Faso. Climate, biodiversity will be the main focus of the 45th G7 summit whose theme is "combating inequality".

During the conversation between PM Modi and British PM Boris Johnson, G7 was discussed. “Ahead of the G7, the Prime Minister and PM Modi agreed on the importance of working together to tackle climate change and other threats to biodiversity", a British government readout on the Modi-Boris phone call said, adding, "They looked forward to meeting at the summit this weekend to discuss this and other issues."

(With inputs from Sidhant Sibal, Anshu Dubey, and Akash Rai)