In his Independence Day speech on August 15, 2019, Prime Minister Narendra Modi had announced the creation of the post of Chief of Defence Staff.

New Delhi: In a historic decision, the Centre on Monday appointed outgoing Indian Army chief General Bipin Rawat as the first Chief of Defence Staff (CDS). General Rawat, who is completing his full three-year term as the Chief of Army Staff on December 31, will continue to serve till March 2022 as the CDS where his main role would be to create synergy in operations and finances of the three services.

This is the first time that the position of Chief of Defence Staff has been created by the central government. General Rawat would be the topmost defence officer of the country besides being the main point of contact for the government for dealing with defence forces` issues.

In his Independence Day speech on August 15, 2019, Prime Minister Narendra Modi had announced the creation of the post of Chief of Defence Staff (CDS).

The recommendation for CDS had first been made after the Kargil War with the argument that this post will create better coordination between the three services -- the Army, the Navy and the Air Force.

National Security Advisor Ajit Doval played a crucial role along with Defence Secretary Ajay Kumar to finalise the roles and responsibilities of the new office of the Chief of Defence Staff.

Notably, the Defence Ministry two days ago amended rules of service and tenure in the Army Rules, 1954. The move was seen as government's intention to appoint Rawat as India's first Chief of Defence Staff. 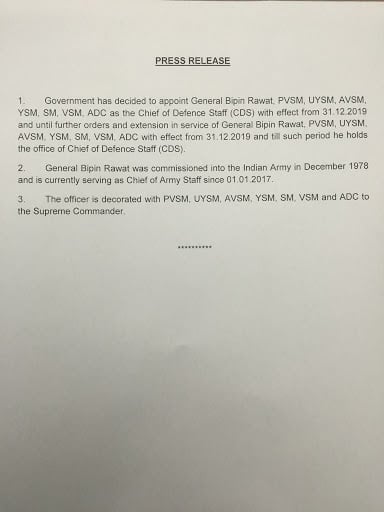 In its notification on December 28, the Defence Ministry stated that Chief of Defence Staff (CDS) or tri-services chief will be able to serve till the age of 65 years. It said, "Provided that the Central Government may, if considered necessary, in public interest, so to do, give extension of service to the Chief of Defence Staff, referred to in the Explanation to clause (a) of sub rule (5), for such period or periods, as it may deem necessary subject to maximum age of 65 years."

General Rawat is credited for bringing the major transformation in the Army structure and turning it into a mean and mean fighting machine of the future.

As the government named General Bipin Rawat as the country`s first CDS, Twitterati hailed the decision, while a few questioned him over his recent statement on the Citizenship (Amendment) Act (CAA). #bipinrawat trended on Twitter.

Punjab Chief Minister Amarinder Singh, himself a former Army officer, wrote on @capt_amarinder: "Many congratulations to General Bipin Rawat as he takes charge as India`s first CDS. My best wishes to him on this new mission as the principal military advisor on all matters related to the armed forces."

BJP leader Baijayant Jay Panda tweeted: "Congratulations to Gen #BipinRawat on being named the nation`s first #CDS. It`s a landmark moment for our armed forces, with the streamlining of all three services & going from silos to coordinated functioning.

Another tweet said: "If one wants to learn the real meaning of leadership, look upon a soldier #BipinRawat sir is an epitome of leadership who led his boys always in an appropriate direction for the integrity of nation."

"Heartiest congratulations to General Bipin Rawat ji on being named India`s first-ever CDS. He will serve as the single-point military advisor to the government," read another post.

One netizen, however, questioned the General over his recent statement on the controversial CAA. He wrote: "General Rawat appointed CDS. Is this the reason he took a political stand on #CAA_NRC_Protests? Is self-advancement a good enough reason to jeopardise the political neutrality of the Indian Army?"