Google marked the 2019 Winter Solstice, celebrating the shortest day of the year when the Earth is farthest from the Sun with a doodle on Sunday, December 22, 2019. 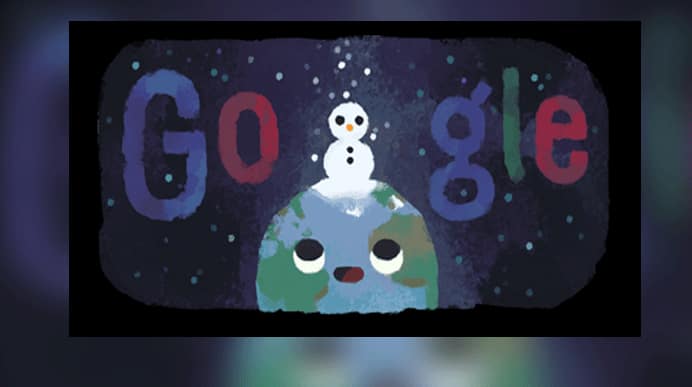 Google marked the 2019 Winter Solstice, celebrating the shortest day of the year when the Earth is farthest from the Sun with a doodle on Sunday, December 22, 2019.

Coming up with yet another heartwarming animation involving an adorable little snowman perched on the Earth, which depicts the second O in Google with a dark background showing snowfall, Google celebrated the commencement of the winter season in the Northern Hemisphere today. The Earth is also portrayed as a baby with big eyes looking adorably up at the snowman.

The Google Doodle, titled 'Happy Winter 2019!', celebrates the winter solstice, the shortest day of the year.

The solstice occurs because the Earth is tilted on its axis of rotation by about 23.5 degrees and the tilt causes each hemisphere to receive different amounts of sunlight throughout the year.

The winter solstice, also known as mid-winter, occurs when one of the Earth's poles has its maximum tilt away from the Sun.

Due to this, earth experiences the shortest day and the longest night of the year.

This year winter begins from December 22 and will last till March 20, 2020, according to Google.

The solstice occurs in the Northern Hemisphere when the sun is directly over the Tropic of Capricorn, located at 23.5 degrees south of the equator. This tilt in Earth's axis brings more exposure of different parts of the planet to the Sun at different times of the year.

In December, as the Earth's North Pole turns away from the Sun, the Southern Hemisphere gets the maximum sunlight. The exact times of sunrise and sunset depend on two things -- the latitude and geographic location within the different time zone.