The victim's father spoke to the Chief Minister and asked for the harshest penalty for the accused. 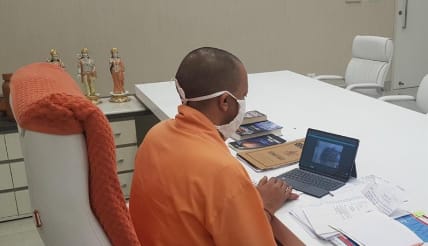 Assuring the victim's father that most stringent action shall be taken against the accused, CM Yogi promised him all possible help to the family of the deceased.

Earlier in the day, the Chief Minister today said that a three-member panel has been set up to investigate the case. He tweeted that the probe panel will submit a report in seven days.

CM Yogi also said that Prime Minister Narendra Modi spoke to him over this horrific incident and has asked him to take strict action against the culprits of this heinous crime.

The girl died in Delhi's Safdarjung Hospital on Tuesday after suffering multiple fractures and paralysis. The family of the victim also claimed that the girl's tongue was cut by her rapists.

The 19-year-old Dalit woman, who died in a Delhi hospital a fortnight after she was gang-raped in Uttar Pradesh's Hathras, was cremated in the early hours on Wednesday. Her family alleged that the local police forced them to conduct the last rites in the dead of night.

However, police officers claimed that the cremation was carried out "as per wishes of the family".

On September 14, the woman had gone to the fields with her mother and went missing soon after. She was found beaten and tortured.

She was first admitted to Aligarh Muslim University's Jawaharlal Nehru Medical College and Hospital and then shifted to Safdarjung Hospital in Delhi on Monday.

Delhi Chief Minister Arvind Kejriwal said the young woman was first ''raped by some beasts" and then the "entire system".

In Mumbai, Maharashtra NCP chief Jayant Patil termed the "behaviour" of the UP Police "inhuman and unfortunate". "Final rites of India's daughter were performed during early hours in the absence of her family members... Daughters are not being respected when they are alive nor while they are dead," he said on Twitter.

Samajwadi Party chief Akhilesh Yadav on Wednesday lashed out at the Uttar Pradesh government over the cremation of the Hathras rape victim, accusing it of "destroying evidence". Taking to Twitter, the former state chief minister said cremating the rape victim under the administration's "pressure" without the "consent" of her family was against the culture.

"This act of destroying evidence is condemnable," he tweeted. The BJP government not only committed a sin by doing so but also committed a crime, Akhilesh said.

The National Commission for Women said it will seek an explanation from the UP Police. "In UP Gang-Rape Tragedy, 2.30 am Cremation By Cops, Family was Kept Out. @NCWIndia condemn it strongly. Why the family wasn't allowed in Cremation?? Why at night?@Uppolice @hathraspolice," said NCW chief Rekha Sharma tweeted.

As the outrage grew, associates of Bhim Army chief Chandrashekhar Azad and its Delhi unit head Himanshu Balmiki alleged that the two have been missing since 10 pm on Tuesday and had been detained by UP Police while they were on their way to Hathras, accompanying the family.