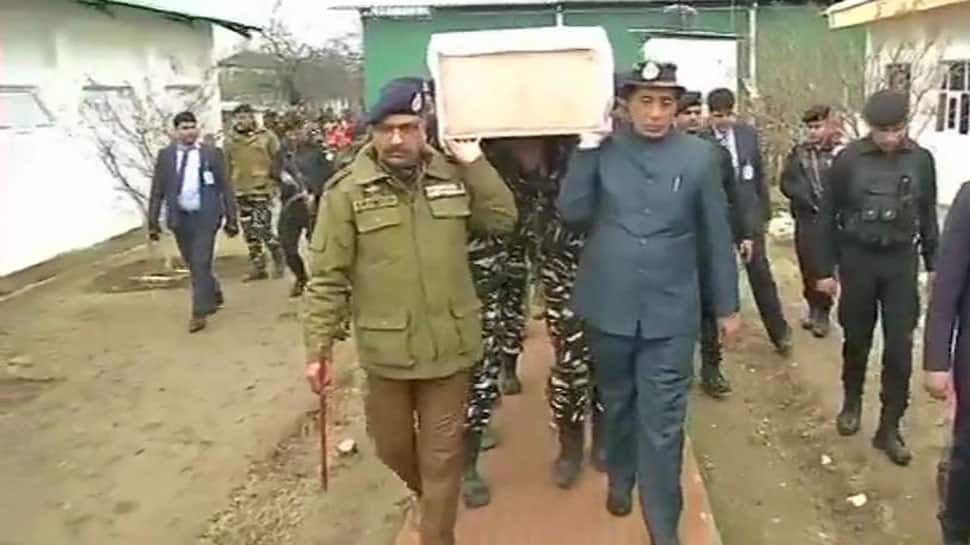 Union Home Minister Rajnath Singh, who reached Srinagar on Friday morning to take stock of the situation following the Awantipora suicide attack, lent his shoulder to the mortal remains of a Central Reserve Police Force (CRPF) soldier in Jammu and Kashmir's Budgam.

The Home Minister is accompanied by CRPF Director General Rajiv Rai Bhatnagar, top officials from his ministry as well and senior officials of the force. Singh will meet Jammu and Kashmir Governor Satya Pal Malik and other senior civil, police and security officials.

CRPF lost 40 soldiers in a suicide attack by a Jaish-e-Mohammed terrorist on Thursday afternoon in Awantipora's Lethpora area while several others have been critically injured. The force has already launched a full Court of Inquiry (CoI) into the attack and also asked all its personnel and formations stationed in Jammu and Kashmir to maintain high vigil alert and be fully prepared.

The force has also vowed to take revenge for the dastardly attack on its 78-bus convoy which was carrying 2,547 soldiers. "We will not forget, we will not forgive. We salute our martyrs of Pulwama attack and stand with the families of our martyr brothers. This heinous attack will be avenged," CRPF tweeted.

The suicide bomber has been identified as 22-year-old Adil Ahmad Dar, a resident of Gundibagh village which is around 10 km away from the area where the attack took place. Dar had dropped out of class 12 in a local school in Gundibagh in March 2017 and gone missing in 2018.

He came into contact with several Pakistani terror groups including Lashkar-e-Toiba, JeM and Hizbul Mujahideen. He finally joined JeM in 2018 and had released a video a few days before the Thursday attack hinting at a major terror strike.