Telangana High Court has given its approval to the state government's proposal to set up a fast-track court for trial in the case relating to gang-rape and murder of a woman veterinarian.

Hyderabad: A Special Court to be set up at Mahabubnagar District Court to hear the rape and murder case of a woman veterinarian, according to the Telangana government order. The gruesome crime triggered nation-wide outrage with people from all walks of life demanding the death penalty for the guilty.

Telangana High Court has given its approval to the state government's proposal to set up a fast-track court for trial in the case relating to gang-rape and murder of a woman veterinarian. The High Court accepted the proposal sent by Law Secretary, clearing the way for setting up the court.

The move has come three days after Chief Minister K Chandrashekhar Rao directed the officials to initiate the process for setting up the court to ensure expeditious trial and stringent punishment to the guilty.

The veterinarian was gang-raped and murdered by four persons near Outer Ring Road at Shamshabad on the outskirts of Hyderabad on the night of November 27. The culprits later dumped the body near Shadnagar town and set afire.

On November 29, the Cyberabad police arrested all four accused -- two truck drivers and two cleaners. According to police, they trapped the victim by deflating a tyre of her scooting and committed the heinous crime when she reached a toll gate to pick her parked vehicle and return home. 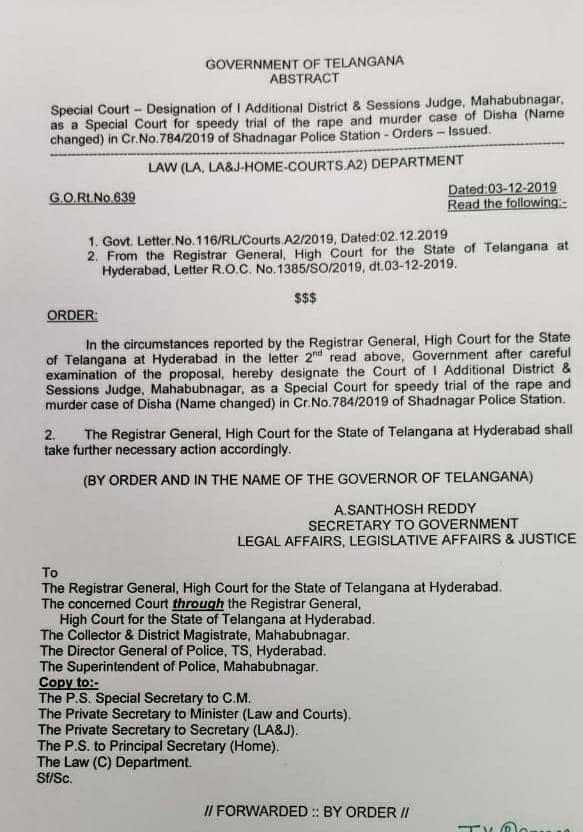 The accused, aged between 20 and 26, had punctured one of the tyres of the woman's two-wheeler after she parked it and took a taxi to visit a dermatologist around 6:15 pm. The men, identified as Mohammad Areef, Jollu Shiva, Jollu Naveen and Chintakunta Chennakesavulu who worked as truck drivers and assistants, reportedly drank whiskey before attacking the woman.

Union Minister of State for Home Kishan Reddy said that the police had adopted a casual attitude instead of having a sense of urgency that could have possibly saved the life of the 26-year-old veterinarian.

Shocked over the rape and murder incident, Reddy had said "It's a matter of grave worry that a woman was subjected to such brutality. We'll give sufficient assistance from centre where needed."