Seventeen people, many of them sleeping guests, were killed in a fire at Hotel Arpit Palace in central Delhi`s Karol Bagh area early on Tuesday morning. 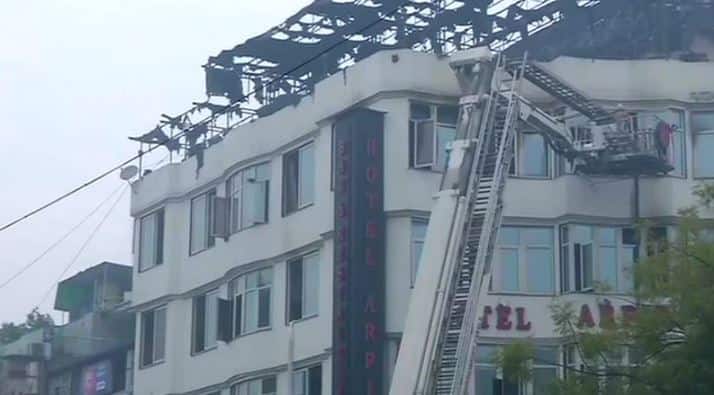 NEW DELHI: Pushed to the extreme by the choking smoke in the Delhi hotel fire, a 38-year-old businessman from Assam dangled outside the window for air and cheated death when finally the firemen brought him down using a ladder after nearly one hour.

Seventeen people, many of them sleeping guests, were killed in a fire at Hotel Arpit Palace in central Delhi`s Karol Bagh area early on Tuesday morning.

Mayur, a clothes merchant who was staying at the hotel that was gutted by fire, told IANS about the pandemonium that ensued inside the hotel after it caught fire and how some of the guests who managed to reach the terrace had to battle the effects of the blaze even there.

"Everyone was in full panic mode inside as there was too much smoke. While people ran helter-skelter for safety cover, I threw half of my body outside my room`s window to catch some fresh air. I remained in that position for about 45 minutes before the firemen came and rescued me," he said.

Those who could manage to run up to the terrace were not spared either. The fibre-sheet which was used as a canopy above the seating arrangements there melted in the fire and came down crumbling on the people hiding there, he said.

"Their ordeal continued for a long time," Mayur said.

Those who were spared death were left shaken and dazed by the worst fire tragedy in the city since the 1997 Uphaar Cinema fire, in which 59 cinegoers had died of asphyxia.