During the joint press meet, the IAF said that one Pakistani F-16 was shot down by an IAF MiG 21 Bison Aircraft. 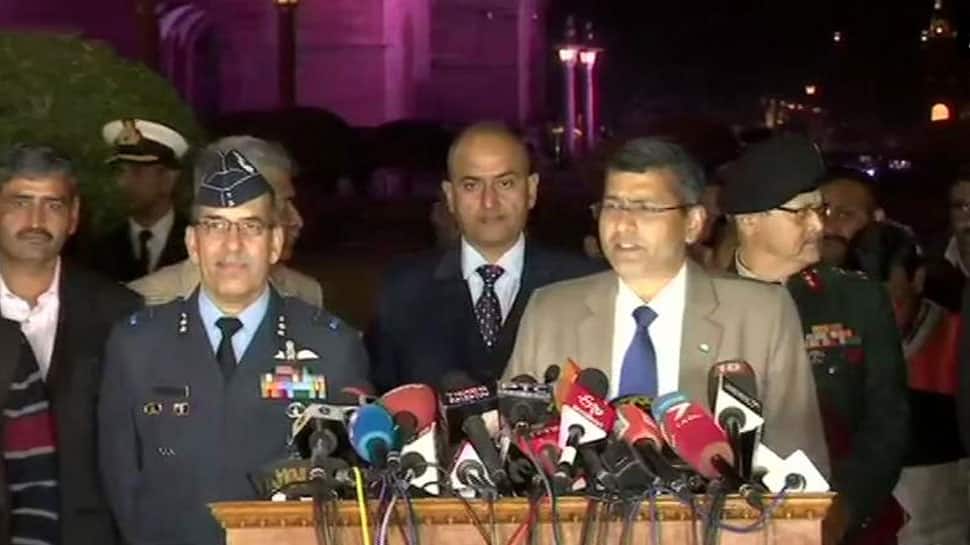 NEW DELHI: India on Thursday confirmed that Pakistan had violated the country's airspace on Wednesday and made an unsuccessful attempt to target vital military installations by using its F-16 bombers. During a joint press meet by the Army, Navy and the Air Force - the officials said that a MiG -21 fighter jet had indeed shot down a Pakistan F-16 bomber after the jets from the neighbouring nation violated India's airspace with an intention to target Indian military installations on Wednesday.

Air Vice Marshal RGK Kapoor said, ''The IAF fighters were tasked to intercept the intruding Pakistani aircraft and managed to thwart them. Although PAF jets dropped bombs, they were not able to cause any damage.''

''One Pakistani F-16 was shot down by an IAF MiG 21 Bison Aircraft. East of Rajouri, parts of F-16 have been recovered, inside the Indian territory,'' AVM Kapoor said.

''There is credible evidence that we destroyed target during our airstrikes on a JeM camp in Pakistan's Balakot,'' Kapoor.

Responding to a question on bombing on JeM terror camps in Pakistan's Balakot, AVM RG Kapoor said, ''It will be premature to say anything on the number of casualties on the camp, whatever we intended to destroy we got that result. But we have evidence that proves that IAF MiG 21 bison downed an F-16 and the F-16 crashed on PoK side. We found AMRAMM debris East of Rajouri. AMRAMM is only found on Pakistani F-16. We also registered F-16's electronic signature on our equipment.''

Air Vice Marshal RGK Kapoor: We have evidence to show that whatever we wanted to do and targets we wanted to destroy, we have done that. Decision to show the evidence is on senior leadership pic.twitter.com/RxwZKJOZaG

To a question on Pakistan's announcement to release the captured IAF pilot, he said, ''Pakistan's gesture to release Wing Commander Abhinandan is in consonance with Geneva Convention,''

He, however, added that the IAF is happy that Wing Commander Abhinandan is returning tomorrow.''

Speaking on his turn, Major Gen Surinder Singh Mahal said the Indian armed forces are ready to meet any eventuality.

''As long as Pakistan continues to harbour terrorists, we will continue to target the terror camps, '' Major General Surendra Singh Mahal said.

Gen Mahal blamed Pakistan for ''escalation of tension between the two countries'' and warned that Indian forces are prepared for any contingency if enemy provokes us.

“We are fully prepared to respond to any provocation from Pakistan,” the officer said in the joint press briefing.

Speaking on his turn, Navy Rear Admiral DS Gujral said, ''We are ready for any misadventure by Pakistan and we are ready for resolute action. We want to ensure the safety and security of our citizens.''

The joint press conference by the Indian Army, Indian Air Force and Indian Navy was held around 7 PM on Thursday in New Delhi.

Earlier, in a surprise announcement, Pakistan Prime Minister Imran Khan on Thursday announced that the captured IAF pilot Wing Commander Abhinandan Varthaman will be released on Friday as a "gesture of peace".

The announcement from Pakistan PM during a joint session of Parliament came barely an hour after Foreign Minister Shah Mehmood Qureshi said that Khan is ready to talk to his Indian counterpart Narendra Modi to de-escalate Indo-Pak tensions.

As the Opposition leader Shahbaz Sharif took the floor of the House, Prime Minister Khan apologised for interrupting and said he wishes to announce that the Indian pilot captured by Pakistan Air Force on Wednesday will be released Friday as a "peace gesture".

Pakistan detained Wing Commander Varthaman following a fierce engagement between air forces of the two sides along the Line of Control when his MiG 21 fighter jet was downed.

India had on Wednesday summoned the acting high commissioner of Pakistan and demanded the immediate and safe return of the IAF pilot who was detained by Pakistan following an aerial engagement by air forces of the two countries.

It was also made clear to Pakistan that no harm should be caused to the Indian defence personnel, the External Affairs Ministry said in New Delhi, adding that it has conveyed strong objection to the neighbouring country at the "vulgar display" of an injured personnel in violation of all norms of International Humanitarian Law and the Geneva Convention.