IIMCAA, which is the largest mass media training institute in the country, is organising alumni meet for its students in 21 different cities in India and abroad.

Raipur: The annual meet connections of Chhattisgarh and Rajasthan chapters Indian Institute of Mass Communication Alumni Association (IIMCAA) were organised in Raipur and Jaipur. IIMCAA, which is the largest mass media training institute in the country, is organising alumni meet for its students in 21 different cities in India and abroad.

The Raipur meet was chaired by vice-chancellor Santosh Kumar. Mrigendra Pandey managed the stage. IIMCAA president Prasad Sanyal while addressing the meet, highlighted the importance of networking among the former students of the institute. He also discussed in details about new initiatives - IIMCAA Medical Assistance Fund and IIMCAA Scholarships.

Madhya Pradesh chapter president Anil Saumitra hailed the decision of expansion of the institute and said that representatives of one state visiting other are an important step.

Giving details about the year-to-year expansion of the institute, organisation secretary Ritesh Varma said that this year, connections will be organised in at least 21 cities.

The Jaipur meet was addressed by chapter president Amrita Maurya. In the meet, the new executive committee of the Rajasthan chapter was formed in which Amrita Maurya was re-elected as the president. In the newly-formed executive, Sachin Saini was elected as the vice-president, Madhav Sharma as general secretary, Ankit Dhaka as secretary and Gunjan Jain as the treasurer. 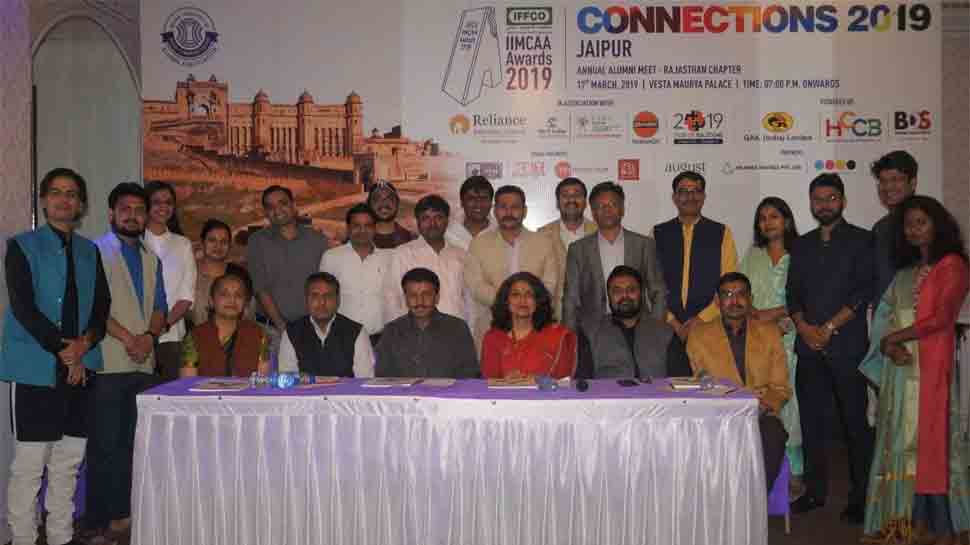 On the occasion, institute president Sanyal discussed a plan of the assistance of up to Rs 20,000 to the IIMCAA Medical Assistance Fund. IIMCAA professor Anand Pradhan said that the institute is preparing a report on female journalists working in the media industry so as to know the details related to their working environment. In the event, several Divyang kids from the NGA 'Angle At Work' also took part.

After the inaugural event on February 17th, at the IIMC Delhi headquarters, Connections 2019 spanning across 20 cities in and outside India, will put curtains down on April 13th in Dhaka at the Bangladesh Chapter meeting of the association.