IMD broadcast stated that there will be heavy rainfall at isolated places over Coastal Andhra Pradesh, Yanam, Telangana and Coastal and South Interior Karnataka. In Delhi, the sky will partly be cloudy with the minimum and maximum temperatures hovering around 19 degrees Celsius and 28 degrees Celsius. 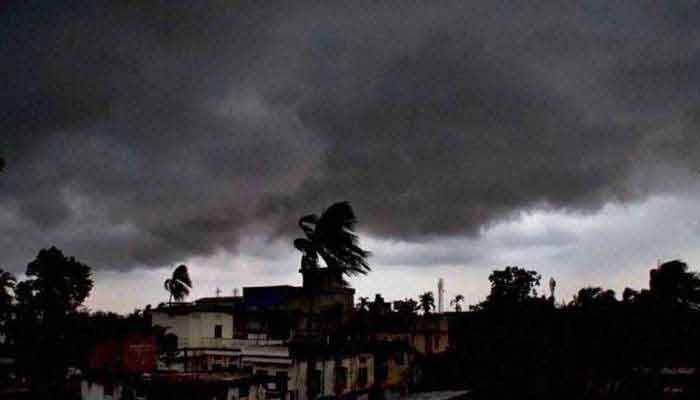 "Heavy rainfall at isolated places over Coastal Andhra Pradesh, Yanam, Telangana and Coastal and South Interior Karnataka," IMD stated in its All India Weather Warning Bulletin. In Delhi, the sky will partly be cloudy with the minimum and maximum temperatures hovering around 19 degrees Celsius and 28 degrees Celsius.

"The sea condition is very likely to phenomenal over west-central and adjoining east-central and the north Arabian Sea and rough to very rough over the southeast Arabian Sea and adjoining Lakshadweep-Maldives areas and along and off Kerala and south Karnataka coasts.'' The organisation has advised fishermen not to venture into these areas for the next couple of days. The weather forecast agency also alerted about the Cyclone KYARR and said that this extremely severe cyclonic storm has moved north-northwestwards with a speed of 4 kmph during the past six hours.

It is very likely to move west-northwestwards till today, re-curve west-southwestwards thereafter and move towards Gulf of Aden off south Oman-Yemen coasts during subsequent three days."It is very likely to weaken into a Very Severe Cyclonic Storm during the morning of October 30 and further into a Severe Cyclonic Storm by the morning of October 31," the IMD stated in its All India Weather Warning Bulletin.

The well-marked low-pressure area now lies over Lakshadweep-Maldives areas and adjoining Comorin area with associated cyclonic circulation extending upto mid-tropospheric levels."The system is likely to concentrate into a Depression over Lakshadweep-Maldives areas and adjoining southeast Arabian Sea during next 24 hours. It is likely to move northwestwards across the Lakshadweep Islands and intensify into Deep Depression during subsequent 24 hours.''

Under the influence of the system over Comorin area and adjoining Equatorial Indian Ocean, heavy to very heavy rainfall is likely over Tamilnadu, Kerala, Lakshadweep and heavy rainfall over Rayalseema and Karnataka up to October 31.