IMD warns of heavy rainfall in several states; floods claim over 170 lives in Bihar and Assam

The death toll in Bihar has reached 106, while in Assam, the number of deaths has touched 68 as two more people died in Morigaon and Golaghat districts since Monday. 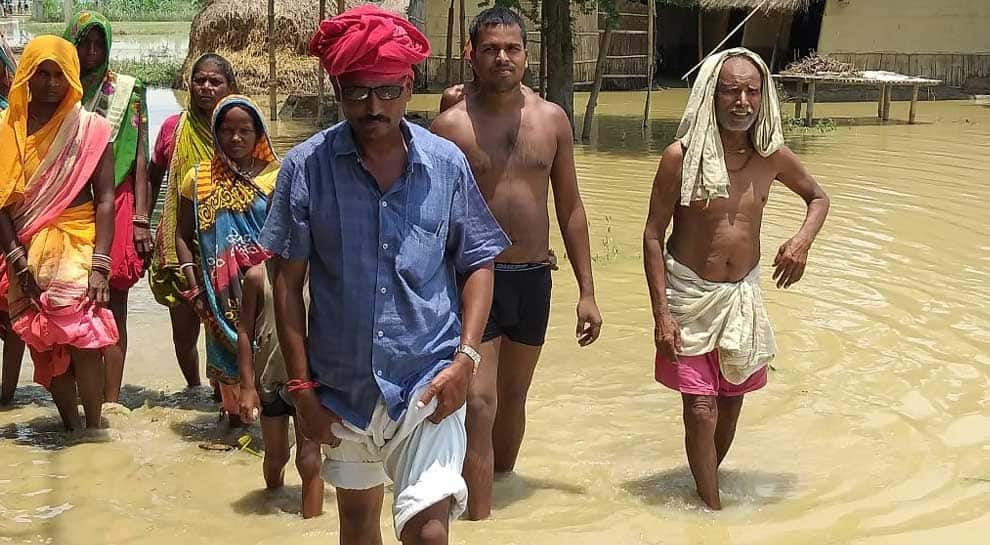 New Delhi: The Indian Meteorological Department (IMD) has warned of heavy rainfall and thunderstorm in several states on Wednesday even as worst floods claimed over 170 lives in Bihar and Assam so far.

According to IMD, states such as Uttar Pradesh, Assam and Meghalaya are likely to receive heavy rainfall on Wednesday.

The agency said that thunderstorm coupled with lightning is very likely at isolated places over Bihar, Jharkhand, Madhya Pradesh, Chhattisgarh, Odisha and West Bengal and Sikkim.

Strong winds with speed reaching 40-50 km-ph are likely to prevail over southwest and the westcentral Arabian Sea, the IMD said.

The weather office issued a warning for the fishermen asking them not to venture into the sea for the next few days.

The warning from IMD came even as overnight rainfall in Mumbai inundated several areas across the city including Sion, Matunga, Mahim, Andheri, Malad and Dahisar causing huge traffic snarls at major junctions on Wednesday.

The weather office had on Tuesday issued a heavy rainfall warning for Mumbai stating that a cyclonic circulation would bring more rain showers to the city in the next two days.

The relentless rainfall led to submersion of railway tracks in Sion.

However, there is a delay of 10 to 15 minutes on the mainline between Kurla and Sion, due to waterlogging in low lying areas of this section, the official said.

Tragically, poor visibility led to the collision of three cars in the Andheri area of the city in the wee hours of Wednesday, leaving eight people injured.

According to Skymet, a private weather forecasting agency, in the last three hours between 2:30 AM and 5:30 AM on Wednesday, Santa Cruz observatory recorded 51 mm of rain, with torrential downpour continuing through the morning in most parts of the city.

The heavy rainfall also affected the arrival and scheduled departure of several flights from the Mumbai Airport as visibility dropped to 300 metres.

Meanwhile, the death toll in Bihar and Assam due to floods has crossed 166 and an estimated  1.09 crore people have been affected by the calamity in the two states.

The water levels have now started receding in several districts of the two states and the situation is fast improving, the officials said

The death toll in Bihar has reached 106, while in Assam, the number of deaths has touched 68 as two more people died in Morigaon and Golaghat districts since Monday.

A total of 28.01 lakh people have been affected in 19 of the 33 districts of the north-eastern state, officials said in Guwahati.

Though the floodwaters have receded in Biswanath and Karbi Anglong districts, the deluge hit Lakhimpur and Baksa again, the Assam State Disaster Management Authority (ASDMA) said.

In the Kaziranga National Park in Golaghat district, the death toll of animals rose to 204, including 15 rhinos, since July 13, it said.

In Bihar, water levels have started receding in several districts and consequently the number of relief camps and those taking shelter at these have also gone down considerably, Disaster Management Department officials said.

A population of 80.55 lakh in 12 districts are still affected in the state.