The Prime Minister also took some jibes at the Opposition and took a sharp dig at Congress President Rahul Gandhi without taking his name. 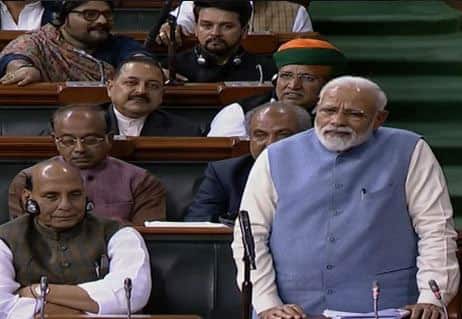 NEW DELHI: Prime Minister Narendra Modi on Wednesday delivered his final speech in Lok Sabha before the upcoming General Election and used his final address to highlight the achievements of his government. The Prime Minister also took some jibes at the Opposition and took a sharp dig at Congress President Rahul Gandhi without taking his name.

Here are the highlights of PM Modi's speech:

- India's self-confidence is at an all-time high. I consider this to be a very positive sign because such confidence gives an impetus to development.

- The world is discussing global warming and India made an effort in the form of the International Solar Alliance to mitigate this menace.

- The country is on the right path towards becoming a $5 trillion economy.

- People have flown big aircraft but our democracy is bigger.

- Where's the earthquake? There was an earthquake coming in Parliament but there was none."

- In the Parliament, I got to know about aankhon ki gustakhiyaan (mischief of the eye),”

- We made strict laws against black money and corruption.

-  After three decades, a government of complete majority came into power.