In new avatar, TDP MP Naramalli Sivaprasad dresses up like MGR during protests in Parliament

TDP MP Naramalli Sivaprasad dressed up like MGR during protests in Parliament. 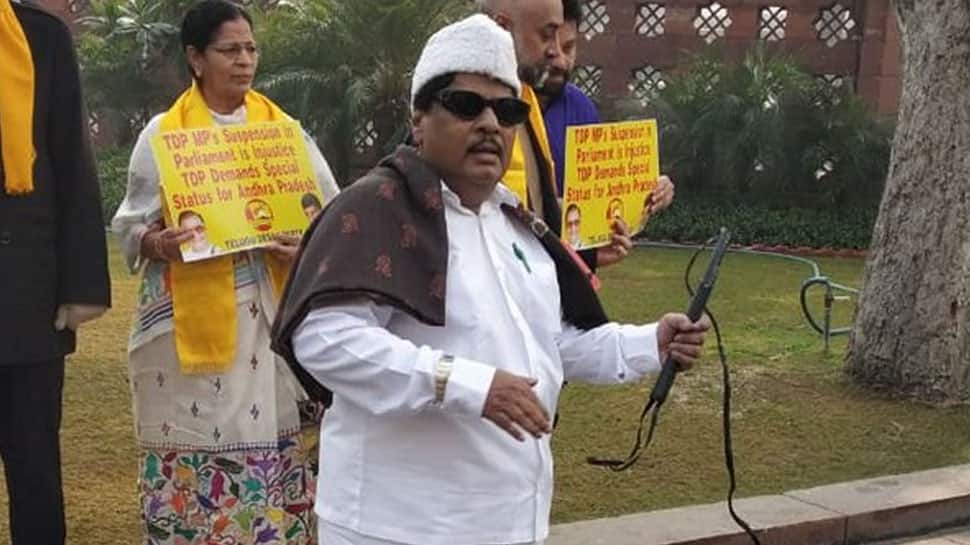 Soon after the Parliament convened for normal business on Monday, a  group of TDP lawmakers started shouting slogans and protested in and outside the Parliament demanding special status for their state.

TDP MP Naramalli Sivaprasad too joined his party colleagues in the protest, this time in a new avatar – he dressed up like former Tamil Nadu CM MGR.

Delhi: Telugu Desam Party MP Naramalli Sivaprasad dressed up as former TN CM MG Ramachandran during TDP protest in parliament demanding 'Special Category Status' to Andhra Pradesh. He has earlier dressed up as a magician, a woman, a washerman & a school student among others. pic.twitter.com/RDbkTjS1NY

In December last year, Sivaprasad had come to parliament dressed up as Lord Shiva to demand special status for Andhra Pradesh.

He had dressed up as a schoolboy, Adolf Hitler, Chhatrapati Shivaji etc to demand special status for Andhra Pradesh.

Protests for Special Status for Andhra Pradesh are public protests that started throughout the state of Andhra Pradesh on January 26, 2017, demanding for the 'Special Category Status' (SCS) which was promised to the state by the Congress Government during the state bifurcation.

TDP chief and Andhra Pradesh Chief Minister Chandrababu Naidu had accused the BJP of breaking promises when his party broke the four-year-old alliance with BJP before the Assembly Elections 2018 and Lok Sabha elections in 2019.

Sivaprasad has also dressed up before as a tantrik, Mahatma Gandhi, Santa Claus amongst several other characters.