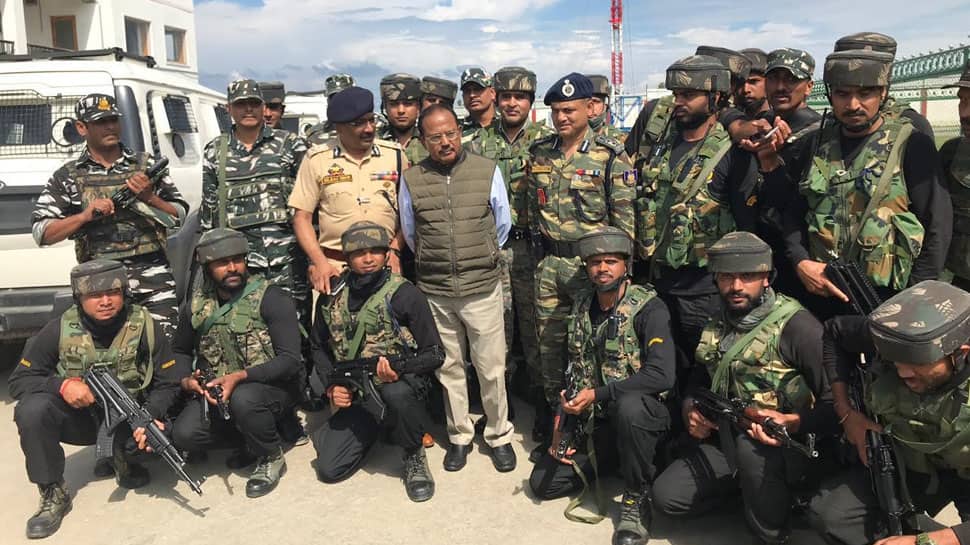 The NSA Advisor gave directions that the common person should not face any hardships. He added that essential food supplies, emergency assistance and provisions should be made available on priority to the people. The concerns of the people should be given topmost priority, added Doval.

The situation in Jammu and Kashmir is normal, according to Doval. There is peace and no untoward incident or agitation has taken place due to cooperation and support of local population. The people have also been moving about with their essential work, he added.

The statement of Amit Shah, "Jammu and Kashmir will become a state again, one day, at the appropriate time if the situation improves and that we don’t want it to remain UT forever", has been welcomed by the local population.

Doval also told the security forces about himself. DGP Singh also told the soldiers how the NSA chief is supporting their work. The NSA also met the people of Shopian and spoke to them.

The Centre's decision have been opposed by several politicians in the Valley. PDP's Mehbooba Mufti and National Conference's Omar Abdullah were taken into preventive detention on Monday night.

Speaking on the abrogation of Article 370, National Conference (NC) president he accused the Centre of stabbing the people of the state. He added that the people will go to the court against the move by the Centre. He also called the move undemocratic. "India fought for its independence for a hundred years. Seventy years of fight for right is not going to change. We will continue to fight," said Abdullah.

Speaking from outside his residence in Jammu and Kashmir, Abdullah said, "As soon as the gate will open our people will be out, we will fight, we'll go to the court. We're not gun-runners, grenade-throwers, stone-throwers, we believe in peaceful resolutions. They want to murder us. My son (Omar Abdullah) is in jail."

"You can see I forced myself outside to talk to you. The home ministry is lying in Parliament that I'm not under house arrest. Why will I sit in my house when my state is getting burned, when my people are being executed in jails and punished. This is not the India I believe in. India is a democratic India, a secular India. This is totally undemocratic," also said Abdullah.

"There is a case in the Supreme Court, why can't they wait? They have stabbed the people of the state. They want to murder us, fire here (pointing his chest)," added the NC president.

"How could I go when my doors are locked Parliament," replied Abdullah when asked why he didn't attend Parliament.

The Centre had left nothing to chance and had already deployed additional troops to Jammu and Kashmir, also because of the prevailing situation and possibility of Pakistan-backed terrorists trying to create unrest. The decision on Jammu and Kashmir is in line with what the BJP had promised in its manifesto before the Lok Sabha election 2019.

Trains will run at speed of 160 kmph on Delhi-Mumbai and Delhi-Howrah routes: Centre