The President said that the people of India have given the mandate to accelerate the development process initiated in 2014. 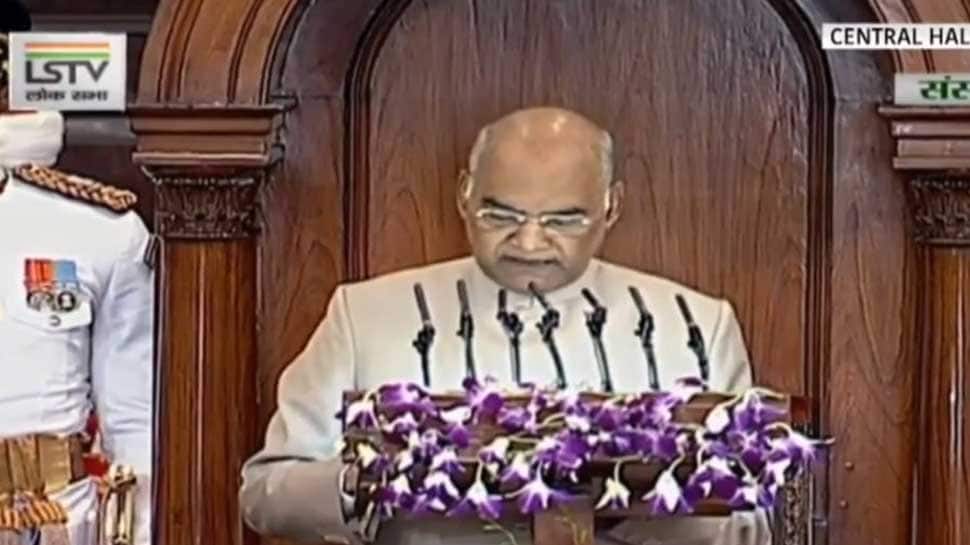 New Delhi: President Ram Nath Kovind addressed a joint sitting of both the houses of Parliament – Rajya Sabha (Upper House) and Lok Sabha (Lower House) –  at the Central Hall on Thursday during which he said that inclusive growth, modernisation of armed forces and gender equality was the top priority of his government.

During his speech, the President urged all newly-elected MPs to be sincere in their responsibilities in line with the Constitution of India.

"I wish you all heartfelt wishes for the next five years and beseech you to dedicate yourselves to the transformation of India and carry out your duties with all sincerity," President Kovind said.

The President said that the people of India have given a "clear mandate" to accelerate the country's development journey that started in 2014.

"In this election, the people of the country gave a clear mandate. After the assessment of the government's first tenure, the people have given it a bigger mandate this time," he said.

The President added, by doing so, the people have given the mandate to accelerate the development process initiated in 2014.

In his customary address to both houses of Parliament after the formation of the 17th Lok Sabha at the Central Hall, President Kovind also presented a 5-year roadmap for the country and said that the government is moving ahead to create a strong, secure and inclusive India.

In his nearly 55-minute joint address of Parliament, the President noted that women came out in large numbers to exercise their franchise in the general elections. A record 78 women have been elected as members of the Lok Sabha - the highest ever - and almost half of the elected members are first timers, President Kovind said.

Shifting his focus to the agrarian crisis in the country and the problems faced by the farmers, President Kovind said the government has started a pension scheme to help farmers and small traders live a life of dignity.

He also congratulated the Election Commission and crores of government officials, security personnel and the general voters for participating in the 2019 Lok Sabha elections.

He pointed out that over 61 crore people voted in the Lok Sabha polls, creating a record of sort.

Elaborating on steps being taken in the education sector, President said, "My government is working to increase seats in higher educational institutes by 50 per cent by 2024 and will create 2 crore more seats."

The President said 26 lakh poor patients have benefitted from the Ayushman Bharat scheme and 1.5 wellness centres are likely to function by 2022.

"My government is giving residential, health facilities to poor as poverty can be removed only by empowering them," he said.

Referring to the water crisis in the country, the President said the creation of the 'Jal Shakti' ministry is a step towards water conservation as water crisis may deepen in the future.

The President said a new industrial policy will be announced soon and the process to further simplify GST will continue.

He said Rs 7.3 lakh crore has been transferred to people under the direct benefit transfer scheme in the last 5 years and over Rs 1.41 lakh crore was saved as 8 crore fake beneficiaries were weeded out.

Shifting his focus to the menace of terrorism, the President said that the government will continue with its policy of zero tolerance towards corruption and terrorism and it will be expanded and made more effective in the days to come.

"My government will make its policy of zero tolerance towards corruption more expansive and effective," he said in his speech.

''Today, the entire world stands with India on the issue of terrorism. The United Nation's blacklisting of Masood Azhar as a global terrorist is a big proof of that,'' the President said.

Talking about women equality and empowerment, the President said that age-old evil traditions of 'triple talaq' and 'nikah halala' should be abolished.

Kovind went on and said the government will build a transport system with an emphasis on speed, security and environment and will also work to make rivers like Cauvery, Periyar, Mahanadi, Narmada and Godavari pollution free.

Terming illegal immigrants as a big threat to the country, the President said that the work is being carried out on the National Register of Citizens and security along the borders will be increased.

Talking about India's space programme, he said, ''Our scientists are preparing for the launch of Chandrayaan-2. It will be India's first spacecraft to reach the moon. India's goal of sending the first Indian into space by 2022 through its 'Gaganyaan' is also progressing rapidly. The successful test of 'Mission Shakti' has added a new dimension to India's space technology capability and the country's security preparedness.''

''India is going to get the first 'Rafael' fighter aircraft and 'Apache' helicopter in the near future," he said.

While stating that India is among the countries in the world that have the most number of start-ups, the President said that the government is working towards financial inclusion and aimed at making India a USD 5 trillion economy by 2024.