Prime Minister Narendra Modi and Bangladeshi PM Sheikh Hasina met on Saturday for more than one hour during which delegation-level talks took place. India will be building Coastal Surveillance System in Bangladesh which will be the second surveillance system to be built by New Delhi in the neighbourhood after the Maldives. 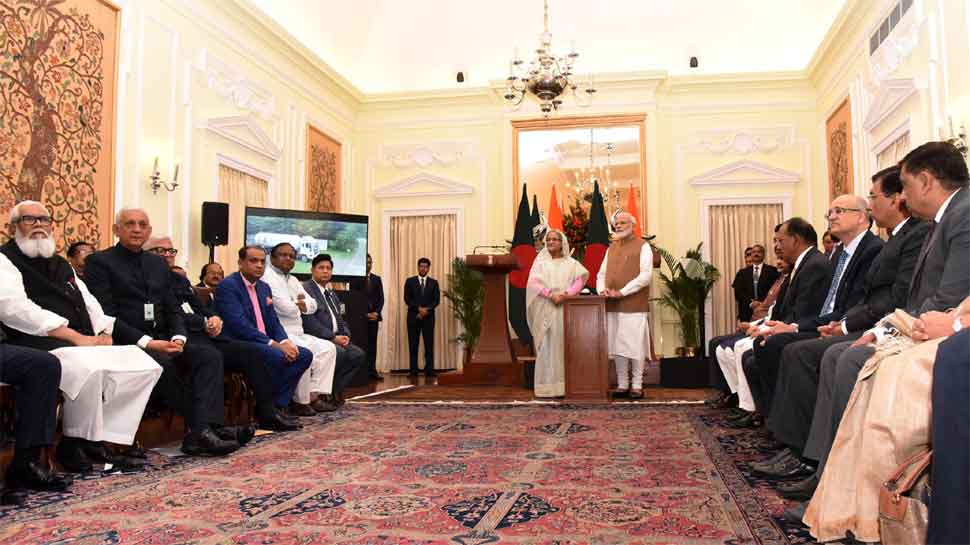 New Delhi: Prime Minister Narendra Modi and Bangladeshi PM Sheikh Hasina met on Saturday for more than one hour during which delegation-level talks took place. India will be building Coastal Surveillance System in Bangladesh which will be the second surveillance system to be built by New Delhi in the neighbourhood after the Maldives.

As many as 20 units are expected to be placed by New Delhi and the aim is to increase Bangladesh's maritime domain and keep an eye on the shared Indo-Bangla coast. PM Modi said, "India Bangladeshi ties are an example of good neighbourly ties" with PM Hasina saying "cooperation will be strengthened in future."

Both PM Modi and Bangladeshi PM inaugurated three projects in energy, skill and social areas through remote control. On the energy front, Dhaka will be providing India, LPG to the northeastern states by using Bangladeshi trucks. This PM Modi said the project will be a "win-win" for both sides. This will be the second "energy bridge" after the "maitree pipeline" which is 130 km pipeline will connect Siliguri in West Bengal to Parbatipur in Bangladesh.

At least 12 projects have been inaugurated by both sides in last year including three on Friday and nine through video conference in the last few months. Seven agreements were exchanged including Mou on withdrawal of 1.82 cusecs of water from Feni river by India for drinking water supply for the Sabroom town in Tripura.

Contentious issues including Teesta were discussed by both the leaders. PM Sheikh Hasina highlighted that the "people of Bangladesh are awaiting early signing and implementation" of Teesta waters sharing agreement, to which PM Modi informed that "his government is working with all stakeholders in India for the conclusion of the agreement soonest possible."

New Delhi will soon supply the fifth tranche of humanitarian assistance to Rohingya refugees in Bangladesh. India has been providing assistance since September 2017 under operation 'Insaniyat' for which PM Hasina conveyed the gratitude of the Bangladeshi government.

The NRC or citizen's role in Assam was raised by the Bangladeshi side to which, according to sources, an Indian government official said, "Matter did come. We pointed out that it was the ongoing process and we have to wait for the outcome. Its court-mandated and court directed."

There was a passing reference of developments in Kashmir and revocation of special status during Hasina-Modi talks and Bangladesh's "clear position which is appreciated by New Delhi and their statement is on record", the government source further said.

SAARC was not discussed in Modi Hasina meet, although BIMSTEC was discussed with both sides agreeing "to streamline the activities of BIMSTEC"

To boost people to people ties and connectivity, Bangladesh has decided to remove restrictions on products being traded through Akhaura-Agartala port. Frequency of Maitree Express has been increased from four to five times per week and that of Bandhan Express from one to two times per week. Both sides have agreed on the Standard Operating Procedure (SOP) on the use of Chattogram and Mongla Ports for movement of goods from India's northeast to rest to India over Bangladeshi territory.

A government source said, "we keen to participate in Bangabandhu Sheikh Mujibur Rahman's Birth Centenary in 2020" and "an invitation has been extended and accepted." Bangladeshi PM last week participated at the 150th birth anniversary of Mahatma Gandhi in United Nations in New York.

The issue of high onion prices was not raised during PMs level meeting but India's trade minister Piyush Goyal has assured that all contracted supplies to Bangladesh in the pipeline should go through as soon as possible. On Friday, Bangladeshi PM publically highlighted the high cost of onions in her own country after India banned the export of the staple.