The signing of the BECA during the 2+2 dialogue between India and the US also signals further boosting of bilateral defence and military ties. 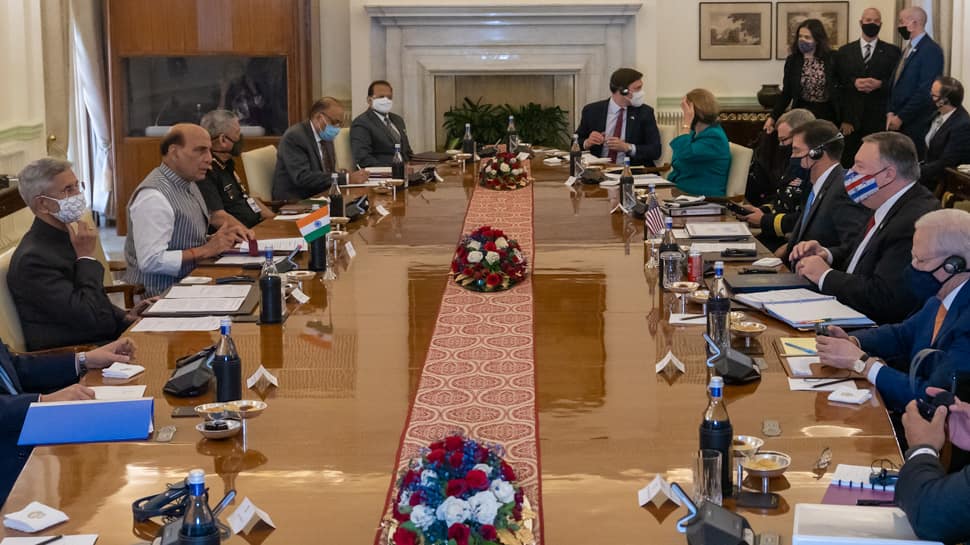 In a landmark deal, India and the United States on Tuesday inked a defence agreement that will allow sharing of high-end military technology, classified satellite data and critical information between the two countries. Both the nations signed a total of five agreements including BECA.

The signing of the long-negotiated Basic Exchange and Cooperation Agreement (BECA) during the third edition of the 2+2 dialogue between the two strategic partners also signals further boosting of bilateral defence and military ties and it comes in the backdrop of India's tense border standoff with China in eastern Ladakh.

About BECA, officials said the agreement will give India access to classified geospatial data as well as critical information having significant military applications from the US.

In the 2+2 dialogue, the two sides deliberated on a host of critical issues including ways to further expand the already close relationship between the militaries of the two countries as well as broader issues of mutual interest in the Indo-Pacific region. External Affairs Minister S Jaishankar and Defence Minister Rajath Singh held the talks with US Secretary of State Mike Pompeo and Defence Secretary Mark T Esper. Both sides were assisted by their top military and security officials.

India-US military agreement: India and the US signed the Basic Exchange and Cooperation Agreement (BECA). Ministry of Defence Additional Secretary Jiwesh Nandan signed the agreement on behalf of India. Defense Minister Rajnath Singh termed the signing of the BECA with the US as an 'important achievement' and said it would open up new avenues in information sharing. "We are eager to discuss further issues with the US," he said.

What is BECA agreement: In the 2+2 talks, the important agreement was signed between the two countries, which can increase the difficulties of China and Pakistan. With this agreement, the information collected by American satellites will be shared with India. With this, India will have access to sensitive communication data of America. This will make the capability of Indian missiles accurate and extremely effective. The agreement will allow the two countries to share extended geospatial information between the armed forces.

Cooperation with the US moving better: In a joint statement after the talks, Defence Minister Rajnath Singh said that we have discussed in detail on many important issues. He said, "Our military-level cooperation with the US is progressing in a much better way, projects have been identified for joint development of defence equipment."

Neighbouring countries were also discussed during the meeting: In a shared statement, Rajnath Singh said, "Our military is making very good progress for military cooperation. In a two-day meeting, we discussed potential capacity building and other joint cooperation activities in our neighbours and beyond. He said that in the meeting we also agreed that the international order based on rules respects the rule of law and freedom of navigation in the international sea and it is necessary to upload the territorial integrity and sovereignty of all states."

Strengthened defence and security partnership: The US Defence Minister said that as the world faces a global epidemic and increasing security challenges, the India-US partnership is more important than ever to ensure the security, stability and prosperity of the region and the world. "We have especially strengthened our defence and security partnership last year during which we have upgraded our regional security and information sharing. Our cooperation meets the challenges of an independent and open Indo-Pacific day and principles," he said.

Tribute to 20 soldiers killed in Galwan Valley: During the joint statement, US Secretary of State Mike Pompeo said, "We visited the National War Memorial, where 20 soldiers who were martyred in the Galvan Valley paid tribute to the brave soldiers of the Indian Armed Forces. America stands with India, as both are facing threats to sovereignty and independence."

Terrorism unacceptable: In a joint statement, EAM S Jaishankar said that during the meeting, relations with our neighbouring countries were also discussed. "We clarified that cross-border terrorism is completely unacceptable. He said that the Indo-Pacific region was the special focus of our dialogue. We reiterated the importance of stability and peace and prosperity for all countries in the region," he said.

The signing of crucial pacts complete: The inking of the BECA completes finalisation of four key pacts between the two countries which were identified as crucial to significantly expand the strategic ties. A key pact called General Security of Military Information Agreement (GSOMIA) was signed by the two countries in 2002. The GSOMIA provides for specific measures to ensure security standards for safeguarding critical information shared by the US with India.

In a major move in 2016, the US had designated India a "Major Defence Partner" intending to elevate defence trade and technology sharing to a level commensurate with that of its closest allies and partners. The two countries inked the Logistics Exchange Memorandum of Agreement (LEMOA) in 2016 that allows their militaries to use each other's bases for repair and replenishment of supplies as well as provide for deeper cooperation.

India and the US signed another pact called COMCASA (Communications Compatibility and Security Agreement) in 2018 that provides for interoperability between the two militaries and provides for the sale of high-end technology from the US to India.