The latest research by the Centers for Disease Control and Prevention (CDC) has revealed that the coronavirus RNA was present even after 17 days on Diamond Princess cruise ship in Japan. 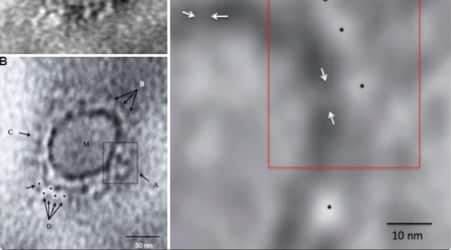 New Delhi: Indian scientists have revealed a microscopic image of the SARS-CoV-2 virus, which causes COVID-19, and the findings have been published in the latest edition of the Indian Journal of Medical Research (IJMR). The image is stated to have been taken from the throat swab sample of the first laboratory-confirmed COVID-19 case in India, reported on January 30, 2020, in Kerala.

The latest research by the Centers for Disease Control and Prevention (CDC) has revealed that the coronavirus RNA was present even after 17 days on Diamond Princess cruise ship in Japan.

According to researchers, "SARS-CoV-2 RNA was identified on a variety of surfaces in cabins of both symptomatic and asymptomatic infected passengers up to 17 days after cabins were vacated on the Diamond Princess but before disinfection procedures had been conducted".

"On the Diamond Princess, transmission largely occurred among passengers before the quarantine was implemented, whereas crew infections peaked after quarantine," said the CDC.

After a person travelling on the cruise ship disembarked in Hong Kong and tested positive for the coronavirus, Japanese authorities decided to disallow the 3,700 passengers on board to leave the ship when it reached Yokohama in February. The ship was hence put in quarantine until February 19, 2020.

When the quarantine in Yokohama, in the end, was removed and passengers could finally disembark, a total of 619 of 3,700 passengers and crew tested positive for COVID-19. The number of infected passengers subsequently rose to over 700. On the Grand Princess ship in California, crew members were likely infected on voyage A and then transmitted SARS-CoV-2 to passengers on voyage B.

"The results of testing of passengers and crew onboard the Diamond Princess demonstrated a high proportion (46.5 per cent) of asymptomatic infections at the time of testing. The study examined the Japanese and US government efforts to contain the COVID-19 outbreaks on the Carnival-owned Diamond Princess ship in Japan and the Grand Princess ship in California," the CDC said, adding "COVID-19 on cruise ships poses a risk for rapid spread of disease, causing outbreaks in a vulnerable population, and aggressive efforts are required to contain the spread."

According to the research paper, "The description of a novel human coronavirus initially referred to as the Wuhan coronavirus (CoV), currently designated as a severe acute respiratory syndrome (SARS)-CoV-2 as per the latest International Committee on Taxonomy of Viruses (ICTV) classification is probably the most recent human pneumonia virus with high outbreak potential."

"This novel virus was initially identified through next-generation sequencing (NGS) and suggested to have a possible zoonotic origin. Till date, detailed morphology and ultrastructure of this virus remain incompletely understood. In India, the first laboratory-confirmed infection by SARS-CoV-2 was reported on January 30, 2020. The throat swab from this case was kept in commercially available transport medium (HiViral Transport Medium, HiMedia, Mumbai)."

It further stated that "While a series of informal reports are available on electron microscopy of the SARS-CoV-2 from Hong Kong University researchers, no detailed studies on ultrastructural cytopathology are available to date."

The researchers summarised "to the best of our knowledge, this is the first report from India detecting the SARS-CoV-2 virus using TEM directly in a throat swab specimen confirmed by PCR. Although TEM imaging was limited by particle load in the specimen, we could still detect morphologically identifiable intact particles in the stored clinical samples without initial fixation."

"Imaging other specimens such as stool and use of immunoelectron microscopy techniques can improve the detection frequency of virus in direct clinical material. This finding emphasizes the merit of the use of conventional negative-stained TEM imaging in clinical samples along with other diagnostic tests in parallel, especially in situations identifying aetiologic agents," concluded the researchers--Sharda Prasad, Varsha Potdar, Sarah Cherian, Priya Abraham, Atanu Basu, and ICMR-NIV NIC Team.