Indonesian foreign minister Retno L. P. Marsudi arrived in Delhi on Friday on a two-day visit to attend the combined session of the Indian Ocean Dialogue and the Delhi Dialogue XI. 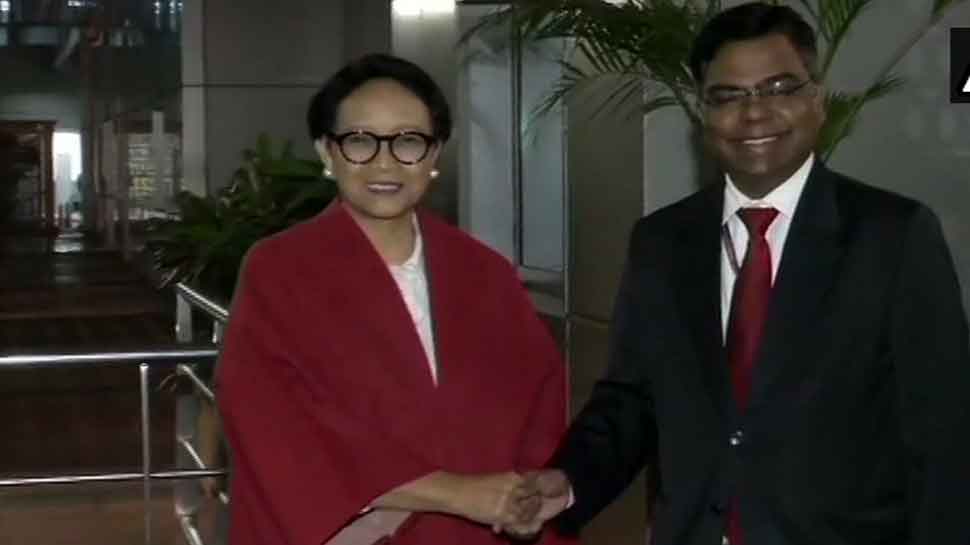 New Delhi: Indonesian foreign minister Retno L. P. Marsudi arrived in Delhi on Friday on a two-day visit to attend the combined session of the Indian Ocean Dialogue and the Delhi Dialogue XI.

The visiting dignitary is scheduled to meet External Affairs Minister S. Jaishankar in the evening and the two ministers will also simultaneously attend the sixth Joint Commission Meeting between India and Indonesia at the Hyderabad House here. Later, Marsudi will deliver a keynote address at the two combined dialogues in the presence of Jaishankar.

The two Track 1.5 dialogues will be held at the Pravasi Bharatiya Kendra here consecutively on two days from December 13 aiming to build an inclusive approach for a "cooperative, free, and rules-based Indo-Pacific" region.

Hosted by the Ministry of External Affairs the dialogues--which are key elements of the Indian Ocean Rim Association (IORA), and the India-ASEAN calendars respectively-will be held consecutively and on similar, Indo-Pacific themes.

The 6th Indian Ocean Dialogue on December 13 on the theme "Indo-Pacific: Re-imagining the Indian Ocean through an Expanded Geography". It is being organised with the assistance of the Indian Council for World Affairs.

Delhi Dialogue XI will start on the evening of December 13 and will run through to the evening of December 14. The theme for this year`s Delhi Dialogue is "Advancing Partnership in Indo-Pacific", and is being organised with the assistance of the Research and Information System (RIS) for Developing Countries. The announcement of an ASEAN Outlook on the Indo-Pacific at the ASEAN Summit in June 2019 and Prime Minister Narendra Modi`s enunciation of India`s vision of the Indo-Pacific at the Shangri-La Dialogue in June 2018 are important drivers of MEA`s current effort to locate the Indian Ocean Dialogue and the Delhi Dialogue within the concept of a free, open, inclusive and rules-based Indo-Pacific, the MEA said in a statement.

Other distinguished guests include special Envoys, Deputy Ministers and senior officials from Brunei Darussalam, Cambodia, Lao PDR, Myanmar and Thailand, as well as the Deputy Secretary-General of ASEAN at the Delhi Dialogue as well as the Foreign Secretaries of Seychelles and Maldives, the IORA Secretary-General and senior officials from South Africa and UAE, at the Indian Ocean Dialogue.

Prior to both of these dialogues, the MEA will also host the first Expert Group Meeting on Academics, Science and Technology of IORA--an official mechanism of the IORA that is intended to promote structured cooperation on academics, science and technology among the 22 member states of IORA. This inter-Governmental meeting will be run by the Department of Science and Technology of India, and is expected to produce a first Work Plan for the Group, to enhance tangible cooperation among the diverse members of the Indian Ocean community.

In parallel with this Expert Group Meeting, MEA will also host on December 12, the 6th Indian Ocean Rim Academic Group (IORAG) meeting, which is a Track-II mechanism with an advisory and catalytic role regarding policy-making among IORA members. Once again, the Indian Council for World Affairs will assist with both of these inter-Governmental processes.

Through these processes, India intends to emphasise its open and inclusive approach to fostering a cooperative, free, and rules-based Indo-Pacific domain, in which all nations and their aspirations for development have equal space to find expression, the statement said.

The Indonesian foreign minister was scheduled to address the joint ministerial session with Bangladeshi counterpart A K Abdul Momen today. But the dignitary cancelled his visit at the last moment due to "increasing demand at home".Commenting on the cancellation the Ministry of External Affairs (MEA) on Thursday said that the foreign minister has given his explanation regarding the same, and asserted that relations between the two countries are strong.

The cancellation of Momen`s visit hold significance as it comes after the Parliament passed the Citizenship Amendment Bill (CAB) aiming to provide Indian citizenship to the members of Hindu, Sikh, Buddhist, Jain, Parsi and Christian communities, who have come from the three countries to India till December 31, 2014, to put an end to them being treated as illegal immigrants in the country.