INSV Tarini, with Navy's all-women crew, arrives in Goa after circumnavigating the globe 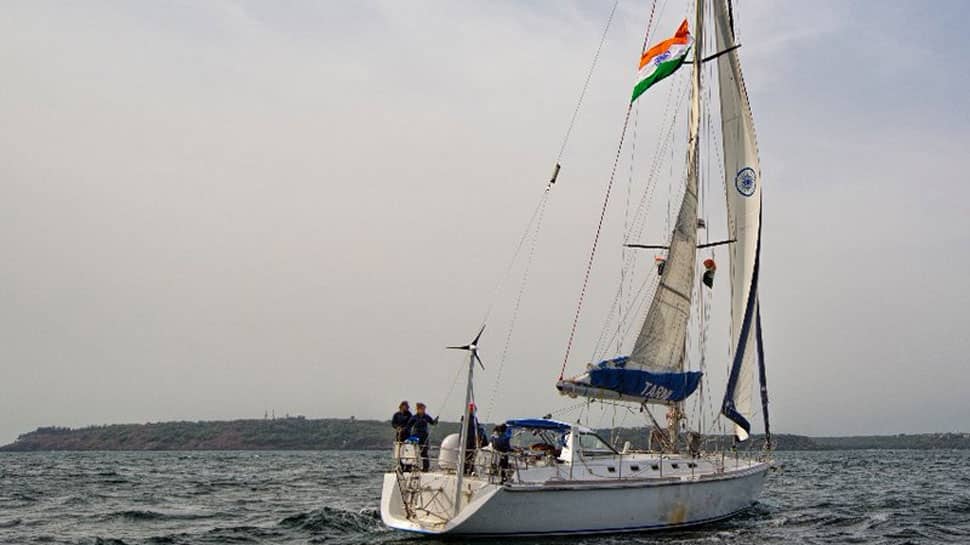 Panaji: Indian Navy's six-member all-women crew arrived in Goa on Monday after circumnavigating the globe in over eight months on board the naval vessel INSV Tarini. The expedition, christened 'Navika Sagar Parikrama', was flagged off from the INS Mandovi boat pool here on September 10, 2018.

Led by Lieutenant Commander Vartika Joshi, the crew had Lt Commanders Pratibha Jamwal and Swati P, and Lieutenants Aishwarya Boddapati, S Vijaya Devi and Payal Gupta as other members. They completed the feat in the 55-foot sailing vessel, INSV Tarini, which was inducted into the Indian Navy on February 18, 2018. It was the first-ever Indian circumnavigation of the globe by an all-women crew, the Navy said.

#WelcomeHomeTarini #INSVTarini is returning back to Goa, India after her historic circumnavigation of the globe! Smt @nsitharaman and Admiral Sunil Lanba CNS to welcome them on 21st May'18 ⛵ pic.twitter.com/7a7vTjsUO0

Lt. Payal Gupta, Logistics Officer of INSV Tarini talks about her experiences on the voyage and warm reception by Indian diaspora during the journey. #WelcomeHomeTarini@nsitharaman @PIB_India @MIB_India @indiannavy pic.twitter.com/qSlh0xcbGa

'Team of six women officers of Indian Navy return on 21 May 2018 after circumnavigating the globe on an Indian-built sail boat INSV Tarini. #WelcomeHomeTarini. pic.twitter.com/e2J1yLeEMZ

Lt Cdr Swathi. P, Navigation officer of INSV Tarini talks about their most challenging part of the voyage and how they successfully reached Falkland Islands from New Zealand after facing multiple storms in the South Pacific at subzero temperatures.#WelcomeHomeTarini@nsitharaman pic.twitter.com/ePIyfZj6EU

Lt Cdr Pratibha Jamwal, Hull Officer of INSV Tarini tells how the made in India Tarini has proved itself in all kinds of harsh weather conditions after circumnavigation. #WelcomeHomeTarini @nsitharaman @PIB_India @MIB_India pic.twitter.com/HZ21Omtn6o

Smt @nsitharaman welcomes the crew of INSV Tarini along with Chief of the Naval Staff Admiral Sunil Lanba in Goa. #WelcomeHomeTarini pic.twitter.com/kYIpR9GgC4

INSV Tarini is almost back to Goa! Smt @nsitharaman to welcome them back on 21st May'18 https://t.co/u1dIsiueVz

The six women officers trained for the project under Captain Dilip Donde, the first Indian to solo-circumnavigate the globe from August 19, 2009, to May 19, 2010, onboard the Indian-built vessel INSV Mhadei, a Navy official said, as per PTI.

"The crew covered 21,600 nautical miles in the Indian-built sailing vessel INSV Tarini that visited five countries and crossed the Equator twice. It sailed across four continents and three oceans, and passed south of the three Great Capes - Leeuwin, Horn and Good Hope," a Navy spokesperson said.

Mandate in Karnataka was against Congress, why are they celebrating, asks BJP chief Amit Shah