It's a 'chor show': BJP on Priyanka Gandhi Vadra's roadshow in Lucknow

Priyanka Gandhi will hold her first mega roadshow in Lucknow on Monday. 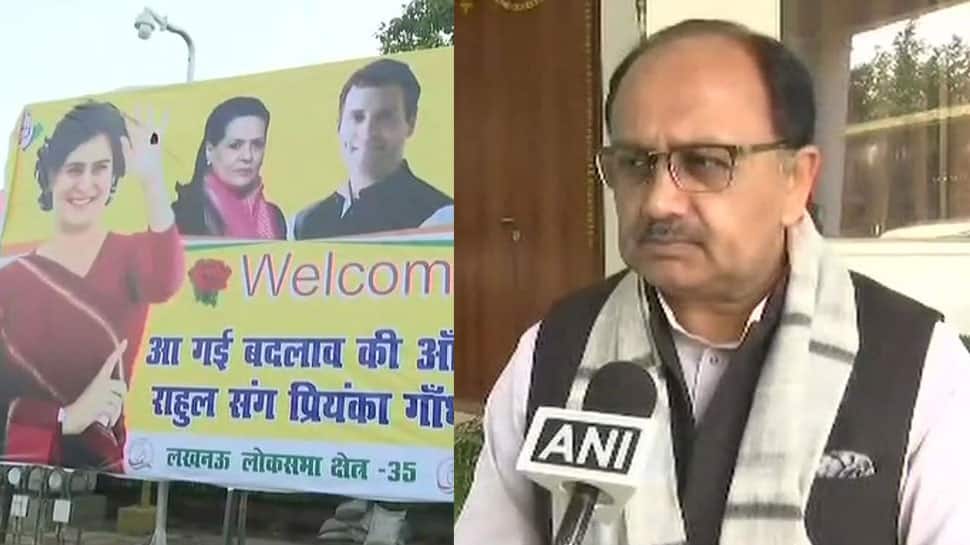 LUCKNOW: While the mood is upbeat among the Congress workers in Lucknow over Priyanka Gandhi's first mega roadshow in Lucknow, the BJP on Monday termed it as a 'chor show' (show of thieves).

Hitting out at the main opposition party, BJP leader Siddhartha Nath Singh said, ''They're calling this roadshow but BJP sees this as 'chor machaye shor'. The Gandhi-Vadra family is out on bail. They can't hold a roadshow but a 'chor show'. People of Uttar Pradesh, especially Lucknow, will come to see corrupt faces of those who looted Rs 12 lakh crore of this nation.''

UP Min SN Singh: They're calling this road show but BJP sees this as 'Chor machaye shor'. Gandhi-Vardra family is out on bail. They can't hold road show but a 'Chor show'. Ppl of UP,especially Lucknow,will come to see corrupt faces of those who looted Rs 12 Lakh Cr of this nation pic.twitter.com/4GBYjNJ6eD

Priyanka will be accompanied by his brother and Congress president Rahul Gandhi and another senior party leader Jyotiraditya Scindia as she makes her first public appearance in the state after her new assignment.

Enthused by her appointment ahead of the crucial Lok Sabha election 2019, Congress workers have planned a grand welcome for Priyanka and several others when they arrive in the state capital on Monday.

According to reports, Rahul, Priyanka and Scindia will arrive at the Lucknow airport and then pass through the main areas of the state capital to reach the Nehru Bhawan office of the UPCC.

They will be welcomed by party workers and leaders at nearly 37 points in the city between the airport and the UPCC office, Congress spokesman Anshu Awasthi said.

Before reaching the Congress office, the Congress leaders are expected to garland the statues of Mahatma Gandhi and former prime minister Rajiv Gandhi on the route.

Hoardings of Congress leaders, including Rahul Gandhi and Priyanka Vadra, have been put up along the route they are proposed to take. Banners on the route read, "Waqt Hai Badlav Ka".

Banner seen in Lucknow ahead of Congress General Secretary for UP East Priyanka Gandhi Vadra, UP West Jyotiraditya Scindia and party President Rahul Gandhi's visit to the city today. pic.twitter.com/i7Fojhb49m

Workers of Congress and its grassroots organisation Sewa Dal have been giving a final touch to the preparations since Sunday.

UPCC chief Raj Babbar held a meeting of Congress workers on Saturday evening to review the preparations for the roadshow, which will also be attended by All India Mahila Congress chief Sushmita Dev and general secretary Anupama Rawat.

Elaborate security arrangements have been made for the visit. Special Protection Group personnel, who provide security to the Gandhis, had visited the UPCC office earlier to review arrangements, the party sources said.

The Congress is expecting the visit to become a virtual launch of its campaign in Uttar Pradesh, ahead of Lok Sabha elections due by May.

Priyanka will meet leaders and office-bearers from 42 constituencies of Uttar Pradesh (East) during her visit till February 14.