Yuva Sena president Aditya Thackeray started his Jan Ashirwaad Yatra from Nashik by seeking blessings of children of the farmers who had committed suicide. 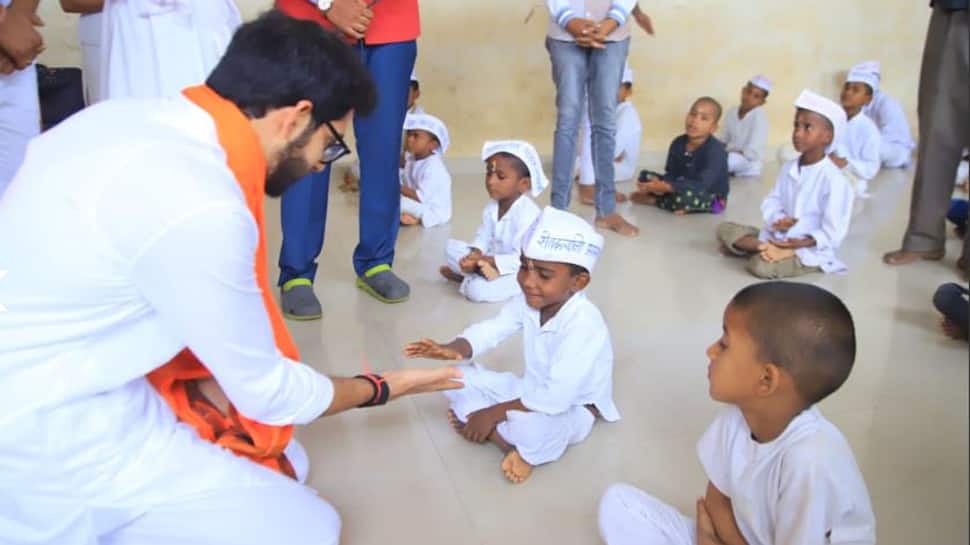 Yuva Sena president Aditya Thackeray started his Jan Ashirwaad Yatra from Nashik by seeking blessings of children of the farmers who had committed suicide.

On his third day of the first phase of the yatra, Aditya visited Adhartirth Anath Ashram in Trimbakeshwar to appeal to the farmers to not commit suicide. "Shiv Sena will help farmers in every possible way to curb farmers' suicide," said visibly emotional Aditya after talking to the children who wore Gandhi caps which read, "farmers don't commit suicide".

Aditya was welcomed by Akanksha Pawar, who had tied rakhi to him before. She lives in the same ashram. The children also performed pooja infront of Aditya to highlight their learnings in the ashram. The ashram houses children of the farmers who had committed suicide.

Aditya also visited Trimbakeshwar Temple to offer prayers to Lord Shiva. Throughout the day, he met farmers, addressed people, party workers, raised their concerns and promised to resolve it. The Yuva Sena president had launched his Jan Ashirwaad Yatra on Thursday and he had covered Jalgaon and Dhule so far. In the next two days, he will reach out to the people of Nagar district in North Maharashtra.

Aditya is undertaking Jan Ashirwaad Yatra in multiple phases wherein he will cover nearly 4,000 kms across Maharashtra to capture aspirations of the people and seek their blessings for his vision of new Maharashtra. Thackeray will hold over 150 public meetings to reach out to people in the yatra. Through his yatra, he wants to create a new age leadership, fulfil people's aspirations and be a leader for all to create a direct contact with the people.