The terror outfit has slammed Zee News of spreading false information about Pakistan and misleading the Indian audience by presenting wrong facts before them. 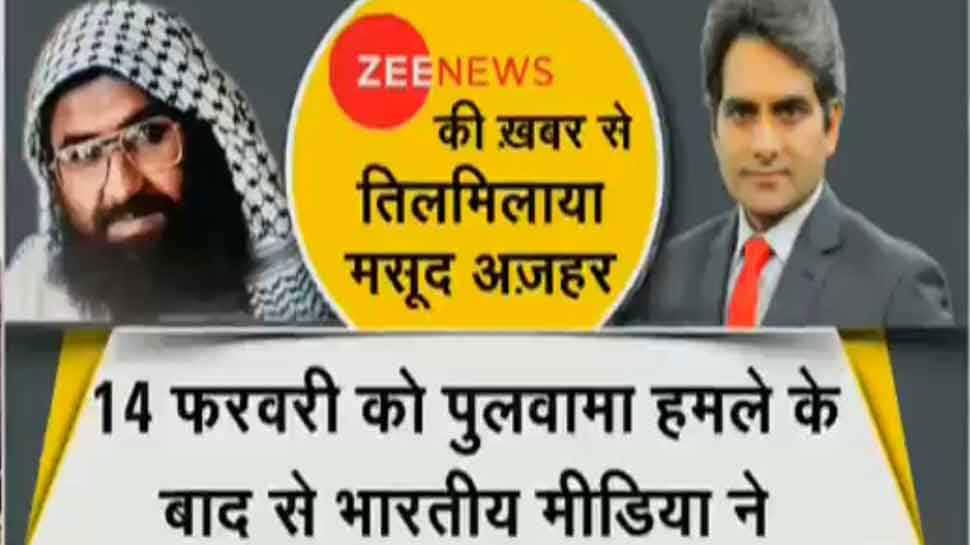 NEW DELHI: Rattled by Zee News' fearless coverage of the Pulwama attack and the role of Pakistan-supported Jaish-e-Mohammad terror group, the banned outfit has mentioned the country's premier news, its popular show Daily News and Analysis (DNA) and Sudhir Chaudhary in its online magazine Al Qalam.

In an editorial published in its online magazine Al Qalam, the terror outfit has slammed Zee News for spreading false information about Pakistan and misleading the Indian audience by presenting wrong facts before them.

The JeM mouthpiece mentioning Zee News and DNA proves that the terror operators operating from the Pakistani soil are under huge pressure and completely rattled by the channel's fearless and nationalist reporting on issues of national importance.

This raises a pertinent question - why JeM boss Masood Azhar, whose outfit had claimed the responsibility for the February 14 Pulwama attack, is so scared of Zee News?

Accusing the Indian media of war-mongering, the banned terror outfit accused Zee News of running a false propaganda against Pakistan, especially in the aftermath of the Pulwama attack on a CRPF convoy on February 14, which resulted in the death of at least 40 troopers.

In an article titled the ''Negative and Condemnable Face of the Indian Media,'' the JeM mouthpiece said in his popular TV show DNA, Sudhir Chaudhary says ''war is the only way to end tension between India and Pakistan.''

While hosting his TV show, Zee News Editor-in-Chief Sudhir Chaudhary pointed out that India played a pivotal role in the formation of Bangladesh and backs the anti-Pakistan movement in the Balochistan. He regularly appeals to the Indian security agencies to increase their activities in Pakistan to disintegrate it in several pieces, the al Qalam article further stated

The terror outfit's article also alleged that while the media in other countries use its discretion before running news stories of explosive nature, the Indian media, especially Zee News, carries baseless information just to provoke the Indian audience and keeps fanning the war hysteria.

The Al Qalam article further claimed that the Indian media has received widespread criticism over its wrong reportage of the Pulwama attack and the developments in its aftermath.

This comes at a time when the United Nations Security Council (UNSC) is slated to meet on Wednesday to decide whether JeM chief Maulana Masood Azhar can be designated as a global terrorist by the world body.

It is to be noted that China has previously blocked several attempts by India to get the JeM chief designated as a global terrorist by the world body.

Al Qalam is an online magazine published by JeM, which is used as a propaganda tool to air its messages of hate despite international pressure on Pakistan to act against the terror outfit.

JeM weekly Al Qalam can be accessed online and features over 250 articles penned by Sa'adi, the pen name of outfit chief Masood Azhar.

This is not the first time that Zee News – a hardcore nationalist Indian media group – has come under attack from terror operators from across the border over its fearless journalism.

After the 2016 surgical strikes by the Indian Army, Lashkar-e-Taiba founder and Jamaat-ud-Dawa chief Hafiz Saeed had issued threats to Zee News.

In a video, which went viral, JuD chief Hafiz Saeed was seen threatening Zee News over its fearless coverage of Indian para commandos’ surgical strikes across the Line of Control during which they dismantled at least seven terror launch pads and killed several terrorists in the Pakistan-occupied Kashmir.

The JuD chief further said that India staged “surgical strike” drama following domestic pressure on Prime Minister Narendra Modi to retaliate after 19 soldiers were killed in an attack on an Army base in Uri sector in Jammu and Kashmir on September 18.

The JuD chief claimed that no raid was actually carried out by the Indian troops.

“The whole film was made in which this surgical drama was shown in which they said their 150 expert paratroopers, after crossing the control line and entering Pakistan, carried out a raid. Actually, no raid was carried out, neither in Bhimber nor in Lipa, Chamb, and Dudhnial,” the 26/11 mastermind added.