JNU administration appeals to protesting students to return to classes

As the protest of Jawaharlal Nehru University (JNU) administration has stretched by nearly three weeks, the university administration appealed to the students to return to classes and resume their "academic work so that losses incurred already may be compensated." 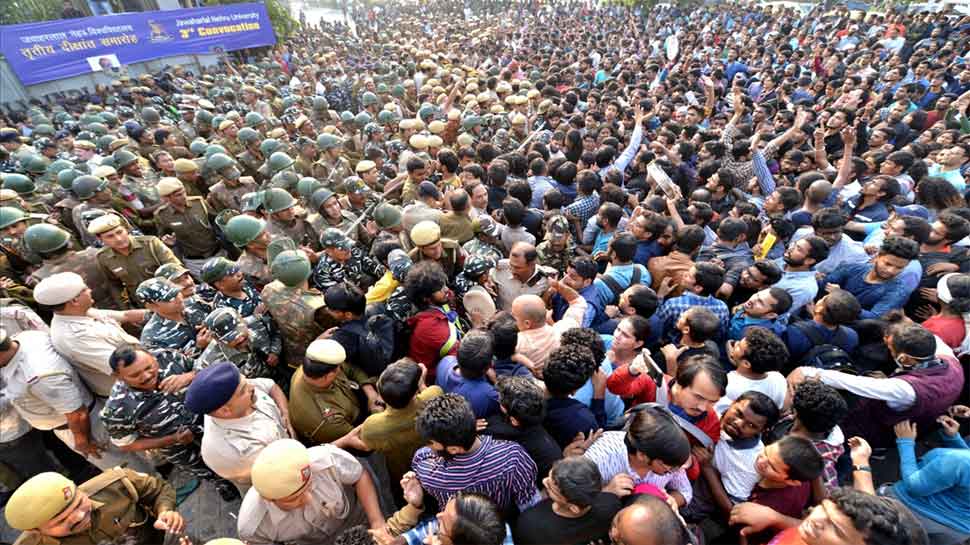 NEW DELHI: As the protest of Jawaharlal Nehru University (JNU) administration has stretched by nearly three weeks, the university administration appealed to the students to return to classes and resume their "academic work so that losses incurred already may be compensated."

Saying that due to the ongoing strike by a group of students, thousands of those students who wish to participate in the JNU academic programmes and plan to complete their academic requirements for continuance in the university have been adversely affected, JNU administration asked the students to put an end to the protest.

The administration further said that the academic calendar has been approved by the Academic Council and the Executive Council, and there will be no relaxation in the deadlines.

Jawaharlal Nehru University (JNU) students are protesting against the draft hostel manual, which had provisions for hostel fee hike, dress code, and curfew timings. since October 29 by boycotting classes and examinations. Last week, after the protest spilled over, the JNU administration partially rolled back the increase in hostel fees and removed the deadline for students to return to their hostels and suggested a dress code for them.

Still, the students continued their protest, saying the decisions did not address their grievances completely and termed the roll back an "eyewash".

JNU Vice Chancellor M Jagadesh Kumar has urged students to end the protest, saying dialogue cannot be dictated through "coercion and illegal methods". The students, however, said the administration has been issuing "thinly veiled threats" to them and teachers supporting them.

The students' union has also said it will take out a march to Parliament on Monday, when the winter session will begin, to protest against the hostel fee hike and appeal MPs to take up their cause.

Jawaharlal Nehru University (JNU) Dean of Students (DoS) Umesh Ashok Kadam on Sunday strongly condemned the vandalism of Swami Vivekananda statue by protesting students of the varsity over fee hike. It may be recalled that a yet-to-be unveiled statue of Swami Vivekananda was vandalised by some unknown miscreants inside the JNU on Thursday.

Addressing a press conference, the JNU official said that the university administration will find the solution to the problems caused to some students due to fee hike. Kadam stressed that the JNU administration will not allow the protesting students to malign the image of the university. According to the JNU DoS, some 100-150 students are trying to create disturbances inside the campus but they will not be allowed to succeed in their plans to destroy the image of JNU.

We all have to work together for the nation despite small differences: PM Modi at NDA meeting