The JNUSU has been on more than a week-long strike against the new hostel manual. Alleging privatisation of the university, the JNUSU asked about the economically deprived students. 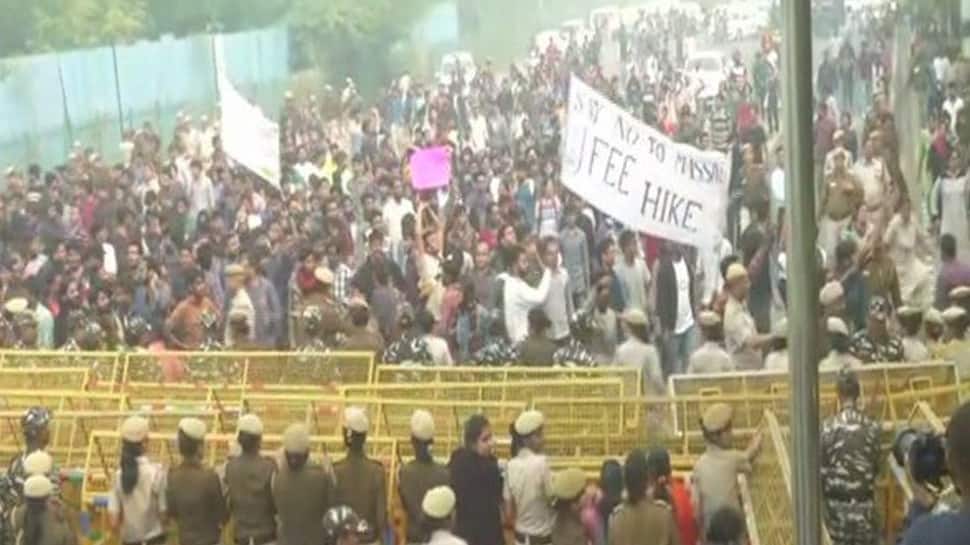 The Jawaharlal Nehru University Students' Union (JNUSU) on Monday held a massive protest in the national capital over several of its demands including fee hike, provisions on dress code and curfew timings. The JNUSU has been on more than a week-long strike against the new hostel manual. Alleging privatisation of the university, the JNUSU asked about the economically deprived students.

Hundreds of JNU students carried out a march from Freedom Square to AICTE Auditorium with banners against the `massive fee hike`. A protester said, "For the last 15 days, we're protesting against fee hike. At least 40 per cent of students come from a poor background, how will these students study here?" Another student said that the university is subsidised so that the poor can also study here. "How will a poor student be able to study here if the hostel fee is over 6 to 7 thousand," the student asked.

The university is hosting its convocation ceremony inside the campus where Vice-President Venkaiah Naidu is the chief guest.

Meanwhile, the police requested students to keep their protest peaceful, according to news agency ANI. "You are resorting to violence. Please keep your protest peaceful," a police official told protesters as a group of students dragged a police barricade. The students were protesting even as Vice President M Venkaiah Naidu was attending a convocation ceremony at the university.